The Rodong Sinmun, the daily of the North's ruling Workers' Party, said that since late June, Kim has traveled to some 20 sites in North Pyongan Province, Yanggang Province, North Hamgyong Province and Gangwon Province.

"It is a story of his love for the people despite the heat wave," the newspaper said, referring to Kim's recent visits to a Pyongyang factory that produces trolleybuses. "How much did we cry while thinking about (Kim's) clothes being soaked with sweat that was falling down like rain!"

The on-site visits came after Kim shifted his strategic policy focus to economic development earlier this year, a change of course that led to the historic June summit in Singapore with U.S. President Donald Trump.

At the summit, Trump and Kim agreed to pursue the "complete denuclearization" of the peninsula, raising speculation about the possible lifting of international sanctions and creation of economic opportunities for the reclusive state. But the two countries' denuclearization talks have so far made little tangible progress. 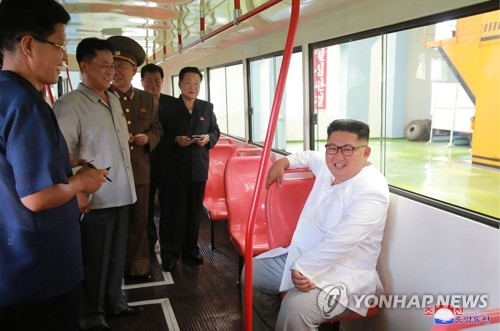