SINGAPORE, Aug. 5 (Yonhap) -- South Korean Foreign Minister Kang Kyung-wha said Sunday it's regrettable that she was not able to hold bilateral talks with her North Korean counterpart in Singapore but added she "respects" his decision.

The annual ASEAN Regional Forum (ARF), held in the city-state on Saturday, provided a rare chance for the top diplomats of the two Koreas to be in the same room.

It came amid a peace mood in Northeast Asia highlighted by two inter-Korean summits at the Panmunjom border village in spring and the North Korea-U.S. summit in Singapore on June 12. Kang had proposed one-on-one talks with the North's Foreign Minister Ri Yong-ho, as he joined the ARF session. 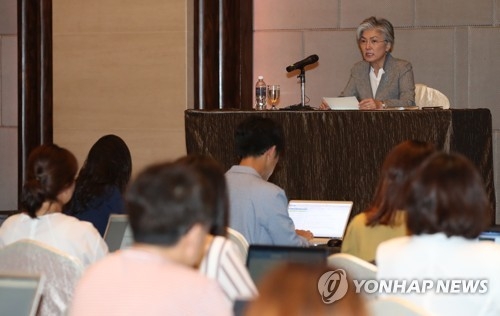 They encountered each other at a gala dinner and traded comments.

"(We) had a brief but candid conversation," Kang told reporters Sunday during a briefing on the results of her weeklong activities here. "There was an exchange of opinions on the Korean Peninsula security conditions and South-North relations."

But Ri rejected Kang's offer for a formal meeting. Ri was quoted as saying that he was "not in the position" to accept the dialogue proposal.

"Regrettably, it was not arranged. But I think we will have to fully respect the position of the other side," she said.

In the face of continued questions about why Ri shunned the talks, Kang said it's not appropriate to speak publicly about that in consideration of diplomatic etiquette. 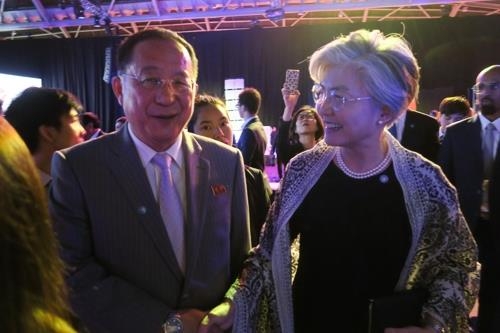 On the issue of declaring a formal end to the Korean War, she said, Seoul maintains the position that the goal can be achieved by the end of this year

"I think the U.N. General Assembly (to be held in September) is an important opportunity," she said. "We are having close consultations (with partner countries)."

Participating in the second ARF as a foreign minister, Kang also focused on highlighting South Korea's efforts to expand cooperation with Southeast Asian nations under the "New Southern Policy."

Seoul's top diplomat held bilateral meetings with her fellow ministers from a dozen countries, which include the United States, China, Japan and Russia.

Ri took part only in the ARF, which is the sole regional multilateral forum involving the North.

He reportedly had separate meetings with his counterparts from China, Cambodia, Indonesia, Laos, Thailand, Myanmar, the Philippines, New Zealand and the European Union.

He is scheduled to hold talks with Singapore's Foreign Minister Vivian Balakrishnan on Sunday before flying to Iran the next day.

S. Korea FM regrets not having engaged in formal talks with N. Korea at ARF

S. Korea FM regrets not having engaged in formal talks with N. Korea at ARF