SEOUL, Aug. 5 (Yonhap) -- All members of an embattled military intelligence unit will return to their original outfits during its disbandment process, a government official said Sunday, a move aimed at facilitating the complete overhaul of the command marred by allegations of political interference.

In line with President Moon Jae-in's order Friday, the military authorities will disband and reorganize the Defense Security Command (DSC) that has recently been criticized for its alleged review of the martial law imposition last year to quash anti-government protests.

The DSC consists of some 4,200 members from the Army, Navy, Air Force and Marine Corps, in addition to public officials.

"As the current DSC will be dissolved and a new command will be created, all DSC members will return to their original bases (the services that they originally belong to) during the disbandment," the official at the defense ministry told Yonhap News Agency, declining to be named.

"When a new command is established, (some of them) will selectively return (to the new command)," he added.

The official also said that in line with the recommendations from a reform panel, the ministry plans to slash the number of the DSC members by 30 percent, and that those who are not subject to the reduction plan will likely return to the new command.

"During the disbandment process and the process of creating a new command, there will be a personnel reform," another government official said on condition of anonymity. "There may also be an infusion of new members from other units into the new command."

The DSC has been the focus of public opprobrium due to relentless political allegations. Most recently, it has been upbraided for its alleged production of a document over the potential invocation of martial law to quash protests calling for the impeachment of then-President Park Geun-hye.

On Friday, the president appointed Lt. Gen. Nam Young-sin, the former commander of the Army's Special Warfare Command, to replace Lt. Gen. Lee Suk-koo, who had led the DSC since September last year. 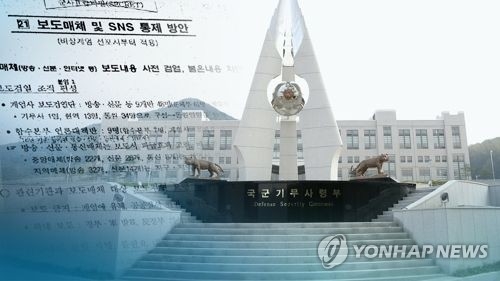 All DSC members will return to original units during disbandment process: official

All DSC members will return to original units during disbandment process: official