SINGAPORE, Aug. 5 (Yonhap) -- The top diplomats of the two Koreas and regional powers engaged in a flurry of diplomatic talks over the past few days in Singapore, although no breakthroughs were made toward Pyongyang's denuclearization and the proclamation to formally end the Korean War.

This year's ASEAN Regional Forum (ARF) followed two inter-Korean summits at the Panmunjom truce village in spring and the unprecedented North Korea-U.S. summit in this city-state in June.

It was a sort of prelude to the U.N. General Assembly to be held in New York next month.

The gathering was widely expected to help maintain the momentum for constructive dialogue amid some signs of an impasse in the Korea peace process.

The U.S. is pressing the North to take concrete denuclearization steps, beyond a show of dismantling nuclear and missile testing sites in the absence of international experts.

The North says it has done a lot, and the Trump administration should reciprocate.

All eyes were riveted on whether North Korea's foreign minister will hold bilateral or trilateral talks with his South Korean and American counterparts -- Kang Kyung-wha and Mike Pompeo, respectively.

Such a meeting did not materialize with Ri encountering the top diplomats at official sessions, shaking hands and trading words and smiles.

Ri spurned Kang's offer of talks, saying he's "not in the position" to do so. Talking briefly with Kang at a gala dinner Friday, Ri gave some explanations. Kang would not reveal details to media. Ri's focus was to mend Pyongyang's ties with Southeast Asian nations and make the case for the international community to relax sanctions on his regime that has suspended provocative acts for months.

"The United States, instead of responding to these measures, is raising its voice louder for maintaining the sanctions against the DPRK and showing the attitude to retreat even from declaring the end of the war, a very basic and primary step for providing peace on the Korean Peninsula," according to a transcript of his speech at an ARF retreat. The DPRK stands for the North's official name, the Democratic People's Republic of Korea.

The North's delegation released the statement to reporters at the ARF venue, the Singapore COEX convention center.

Ri also delivered the same position to his counterparts from several countries, including China, Cambodia, Thailand and the Philippines, during bilateral talks held on the sidelines of the ARF.

The U.S. secretary, however, emphasized the need to continue sanctions until the "final, fully verified denuclearization" of the communist nation.

He warned the world that the U.S. will take "very seriously" any move to undermine denuclearization efforts.

He publicly pointed out "credible" reports that Russia has allowed joint ventures with North Korean companies and issuing new permits for its "guest" workers in violation of U.N. Security Council resolutions.

As the North's minister engaged in the rare multilateral diplomacy here, the U.S. Treasury Department announced its own new sanctions on the North's government official and entities. 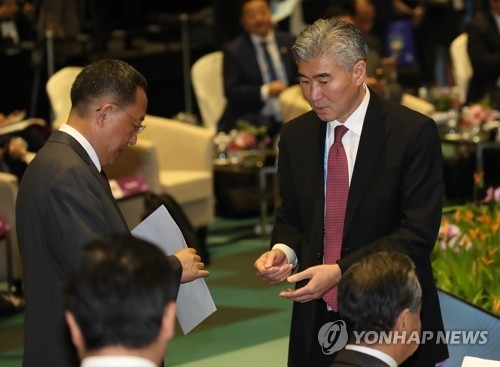 A silver lining at the latest gathering is that the North's leader Kim Jong-un and U.S. President Donald Trump are still contacting each other.

It shows that both Pyongyang and Washington remain committed to dialogue in spite of a recent tug-of-war over the sequence of what they want.

It's "obviously a good, positive thing ... keeping with the trend of our time and reflects the aspiration of people of all countries, including the two countries on the Korean Peninsula," he said at a press conference, responding to Yonhap News Agency's query.

The remarks represented Beijing's expression of its clearest-yet position on the issue. 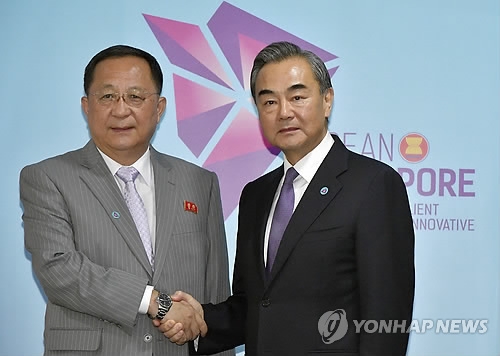 (News Focus) No breakthrough at ARF for denuclearization, war-ending declaration

(News Focus) No breakthrough at ARF for denuclearization, war-ending declaration