SEOUL, Aug. 5 (Yonhap) -- The nuclear envoys of South Korea and China will hold talks in Beijing this week over North Korea's denuclearization and peace on the peninsula, Seoul's foreign ministry said Sunday.

Lee Do-hoon, representative for Korean Peninsula peace and security affairs, is set to meet his Chinese counterpart Kong Xuanyou on Monday, as part of efforts to strengthen the two countries' "strategic communication," the ministry said.

"(They) plan to exchange their views on ways to achieve the goal of the complete denuclearization and establishment of a lasting peace on the peninsula, based on the content of each side's exchanges with major countries, including Rep. Kong's visit late last month to North Korea," the ministry said in a press release.

Observers said that the two sides may touch on the issue of declaring a formal end to the 1950-53 Korean War.

Seoul's Foreign Minister Kang Kyung-wha has said that she had "considerable" consultations over the issue with her Chinese and U.S. counterparts on the sidelines of Singapore forums with the 10-member Association of Southeast Asian Nations last week.

Seoul has been pushing for the political declaration by the end of this year. Pyongyang also wants it to happen soon, but Washington remains cautious, demanding the North first take tangible denuclearization steps. 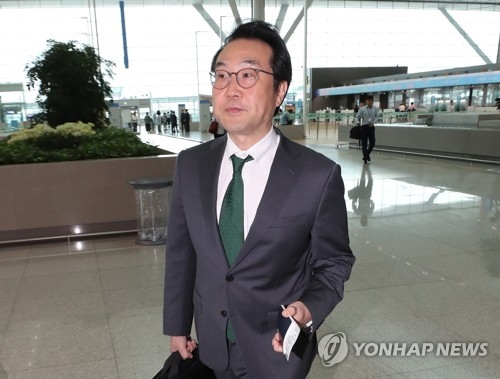