Data showed that the rising mercury is causing people to flock to large malls and fueling sales of products like air conditioners and parasols.

Operators of Lotte World Mall in southeastern Seoul said a record-breaking 200,000 people visited its store Wednesday, followed by 210,000 the following day. This it said is roughly two times higher than the daily average of 110,000 who visited the mall during the weekdays in the first half of 2018. 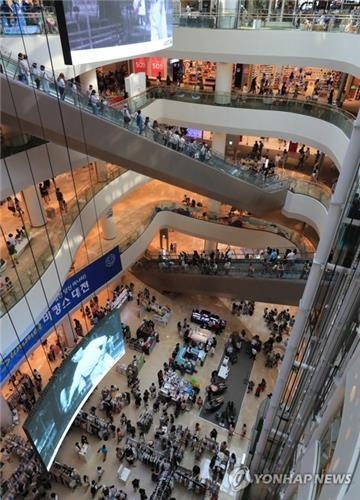 Lotte added that an unprecedented number of people visited restaurants at the mall, with room at its Signiel Hotel being booked solid for five straight days through Saturday as people scramble to get away from the heat and just relax while enjoying the various amenities offered.

Lotte World Mall is made up of South Korea's largest skyscraper at 555 meters, which has a hotel and residence accommodations, along with offices. It has an aquarium and a concert hall.

The department store arm of the mall said its umbrella and parasol sales surged 39.1 percent on-year last month, reflecting efforts being taken to beat the heat.

"Air conditioner sales almost always reach the highest level in May ahead of the summer months, with numbers for July usually being some 70 percent of the peak month," a Hyundai source said. He said for this year, sales last month reached 120 percent of May's.

It said demand for parasols skyrocketed 247 percent from July 20 through last Thursday.

Other retailers, such as mobile commerce store TMON Inc., said in July, its sales of air conditioners soared 195 percent on-year, breaking all previous records for the month.

"The unexpected heat wave is causing a shift in consumer trends as people try to stay as cool as possible," a market watcher said.

He predicted that unless temperatures go down the latest developments could continue at least in the first weeks of August.
(END)