In a national party convention, the former unification minister took the helm of the party whose approval ratings have been languishing in woeful single digits, with its members still smarting from a humiliating election debacle in June.

Chung replaced four-term lawmaker Cho Bae-sook, who had led the party since a group of defectors from a center-left party launched it in February to retain their liberal political platform against a middle-of-the-road political campaign.

The most immediate challenge for Chung is expected to be boosting its support ratings that have been hovering between 1 percent and 3 percent. He may also face pressure to boost his party's parliamentary presence, as it has only 14 seats, short of the 20-seat threshold required to form a parliamentary negotiating bloc, observers said.

In 1996, Chung entered politics with the recommendation of former late President Kim Dae-jung. That year, he was first elected to the National Assembly. Between 2004 and 2005, when then-President Roh Moo-hyun was in office, Chung served as the unification minister.

During a presidential election in 2007, Chung was a standard-bearer for the then ruling United New Democratic Party. But he lost by a large margin to then opposition candidate Lee Myung-bak. 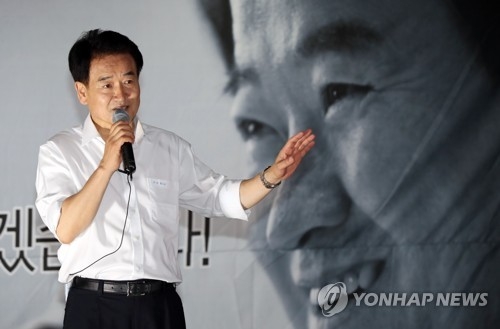