Oh slammed the door on the Milwaukee Brewers in the bottom of the 11th inning to preserve the Rockies' 5-4 victory at Miller Park in Milwaukee on Sunday (local time). It was his third save of the season and first since joining Colorado in a trade from the Toronto Blue Jays on July 26.

Oh, who worked around two singles, lowered his ERA from 2.46 to 2.42. He hasn't allowed an earned run in five appearances as a Rockie, a span of five innings.

The Rockies acquired Oh, a 36-year-old veteran with closing experience in South Korea, Japan and the United States, to address their lingering bullpen issues. While Oh has done well for himself, the adventures of the shaky relief corps have continued since his arrival. 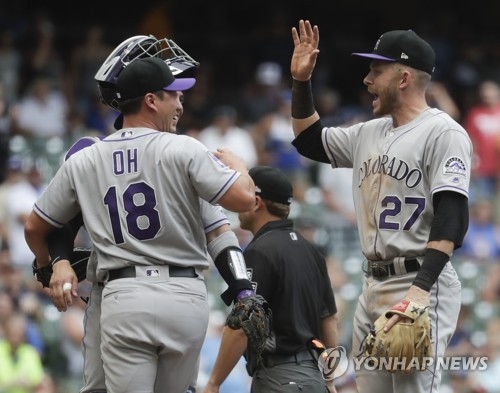 Closer Wade Davis, who'd given up five earned runs while blowing back-to-back save opportunities last week, was held out of Sunday's game, as Adam Ottavino was summoned in the ninth inning to protect a 4-1 lead.

But Ottavino also blew a save, giving up a home run and an RBI double, and then throwing a wild pitch to let the Brewers even things up at 4-4.

The Rockies broke the tie with Nolan Arenado's solo blast in the top of the 11th and in came Oh for the bottom half of that inning.

Travis Shaw greeted Oh with a single, but Oh got Ryan Braun to fly out to center. Jonathan Schoop's single put two men on board, but Oh induced a game-ending double play off the bat of Erik Kratz.

Kratz was initially ruled safe on the 3-6-1 play -- with Oh covering the bag after first baseman Ian Desmond fielded the ball -- but the Rockies won the replay challenge to snap their four-game losing streak.