He arrived at the special counsel's office in Gangnam, southern Seoul, at around 9:30 a.m. amid tight security set up to fend off any clashes.

The scandal centers on allegations that the power blogger Kim Dong-won, better known by his nickname Druking, massively manipulated comments on Internet news stories in an effort to sway public opinion on hot-button political issues in favor of the now ruling Democratic Party.

Standing before a barrage of camera flashes, he again denied any wrongdoing.

"I, more than anyone else, called for the launch of this special probe," he told reporters. "I've said many times I will confidently cooperate with the investigation."

"I do ask once again that the special counsel uncover the truth and bring an end to the deepening political dispute."

The special prosecution team summoned him as a suspect on Friday. He faces possible charges of obstruction of business and violation of the election law.

He has denied these allegations, saying they are "a fiction."

Police dispatched some 500 officers from five squads to guard around the premises. They also set up a fence around where Kim stood before the press and guided passersby to walk along the outside. 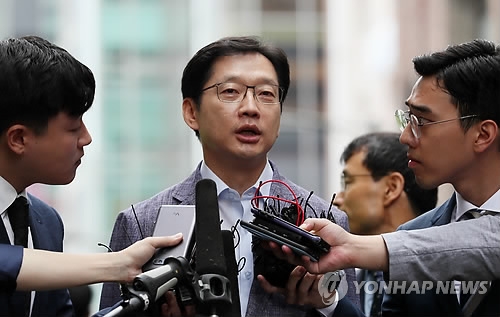