SEOUL, Aug. 6 (Yonhap) -- Next year's increase in nominal exports may stop short of the gain in real exports, the central bank projected Monday, primarily due to the price fall in semiconductors.

The Bank of Korea expected a 1.5 percent increase in nominal exports for 2019, lower than the 3.5 percent hike in real exports. If such a projection turns out to be true, the underperformance would be the first in three years.

The 15.8 percent nominal increase rate last year was bolstered by the semiconductor industry, helping to raise it far above the 3.8 percent increase in real exports. The same was expected for this year, with the nominal rate of 5.6 percent outdoing 3.5 percent of the real rate.

For next year, however, a turnabout is expected from a slash in prices for chips.

The semiconductor export prices index in the final quarter of last year came to 51.82, the lowest in six years and three months. It fell further to 51.66 in the first quarter of the year and to 51.45 in the second quarter. Industry watchers believe that while the industry is not in a downward spiral, it has hit its peak and is on a decline.

Economists say a fall in nominal exports could affect the growth in the nominal gross domestic product as well. The fall in the chip price could worsen South Korea's trade terms, which may bring down the GDP deflator, consequently blunting the gain in nominal GDP. 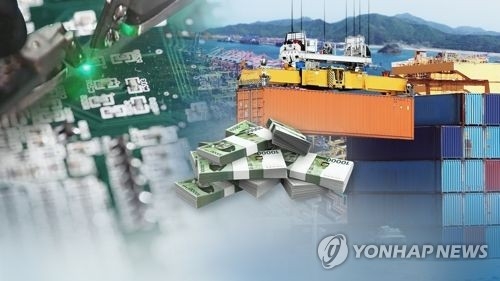