SEOUL, Aug. 6 (Yonhap) -- The domestic action fantasy film "Along With the Gods: The Last 49 Days" posted one of the biggest debuts in weekend box-office history, data showed Monday.

The sequel to the 2017 smash hit "Along With the Gods: The Two Worlds" sold 3.84 million tickets from Friday to Sunday, recording 6.19 million in the accumulated number of tickets sold, according to the computerized tally from the Korean Film Council.

The movie was seen by 1.46 million people on Saturday alone, setting a new single-day sales record in South Korea. The previous record was 1.33 million set by "Avengers: Infinity War." 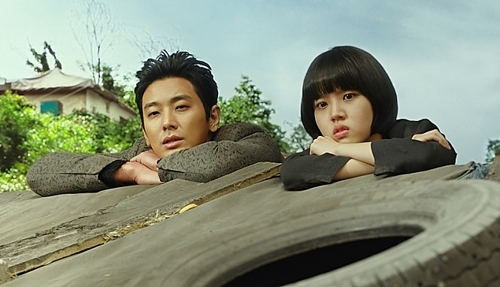 The fast pace suggests that the film may outdo its predecessor "The Two Worlds" (seen by 14.4 million) and even the country's most-watched film of all time "Roaring Currents" (seen by 17.6 million).

While "The Two Worlds" revolves around a firefighter named Ja-hong (played by Cha Tae-hyun) and his family as he is judged in seven hells for 49 days after his death, the second film focuses on the pasts of the three grim reapers from the first film, played by Ha Jung-woo, Ju Ji-hoon and Kim Hyang-gi, who were human beings some 1,000 years ago.

Directed by Christopher McQuarrie, the sixth installment in the American spy action franchise follows agent Ethan Hunt and his team as they race against time to recover stolen plutonium after a mission goes wrong.

Two Korean animated movies took advantage of the school vacation week by winning the third and fifth spots in the heated competition with big-budget action blockbusters: "Hello Carbot the Movie: The Cretaceous Period," a film adaptation from a popular children's animated TV series, garnered 327,970 views, while "The Haunted House: The Secret of the Cave" attracted 99,802.

Disney-Pixar's animated film "Incredibles 2" stayed high on the weekend chart on its third weekend. It came in fourth with 199,170 tickets sold.

'Along With the Gods 2' debuts strong at weekend box office

'Along With the Gods 2' debuts strong at weekend box office