The finance minister said the government promised to make efforts to resolve the request by Samsung for deregulation for bio business and to review a series of policies to meet Samsung's other requests.

"Whether to invest or not is totally up to a company," Kim said, adding that innovative growth sought after by companies would help raise employment.

In response, Samsung promised to provide further support to its second and third subcontractors for its smart factory push, according to Kim.

The Samsung executive said that the meeting served as an occasion to be mindful of the fact that the company needs to be supported by the South Korean people, investors and subcontractors as well as smaller firms.

Lee also said that Samsung will create more jobs through technology development, though he stopped short of announcing detailed investment and hiring plans.

According to those at the meeting, Lee said the tech company will make every effort to ensure that young people can have dreams and allow employees to have sense of pride in what they do. 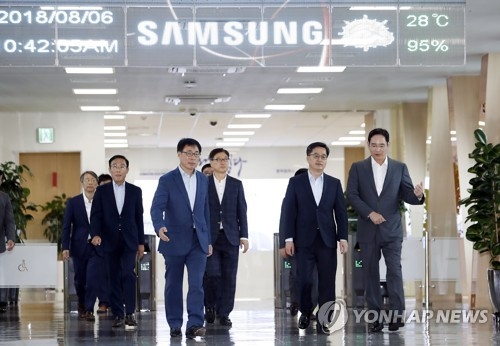