SEOUL, Aug. 6 (Yonhap) -- The director and cast of the Korean box office hit "Along With the Gods: The Last 49 Days" have received a warm welcome in Taiwan ahead of its release in other Asian countries, its local distributor said Monday.

Director Kim Yong-hwa and actors Ha Jung-woo, Ju Ji-hoon, Kim Hyang-gi and Ma Dong-seok walked on the red carpet rolled out at a square in front of the Taipei City Hall on Sunday, according to Lotte Entertainment. About 3,000 movie fans and journalists from major Asian news media attended the event despite sweltering weather, it added.

"The event was held on an unprecedentedly large scale. This marked the first time that we sealed off a six-lane road for a red carpet event," the company said. 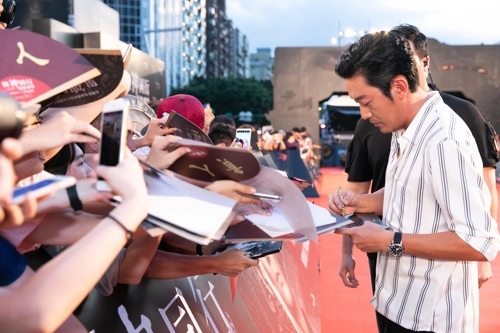 They will stay until Tuesday for a press conference, media interviews and brief onstage appearances for local movie fans.

The film is scheduled to open in Taiwan on Aug. 8, Hong Kong on Aug. 8, Vietnam on Aug. 10, Thailand on Aug. 16, Singapore on Aug. 22, Malaysia on Aug. 30 and the Philippines on Sept. 5. In South Korea, the movie has already drawn an audience of over 6 million since it opened Wednesday.

"The Last 49 Days" is the sequel to the "Along With The Gods: The Two Worlds," the second most-watched film of all time in South Korea with 14.4 million views. It became the top-grossing Asian film ever in Taiwan. 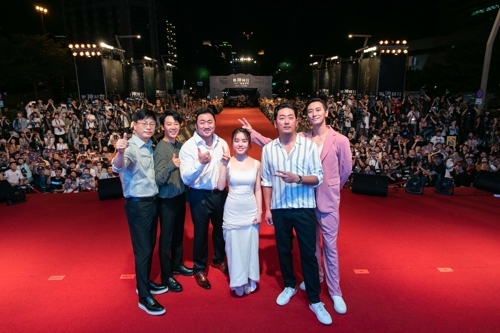 'Along With the Gods 2' red carpet draws 3,000 movie fans in Taiwan

'Along With the Gods 2' red carpet draws 3,000 movie fans in Taiwan