SEOUL, Aug. 6 (Yonhap) -- A state panel assigned to investigate the 2014 Sewol ferry disaster failed to pinpoint the exact cause of the ship's sinking after a yearlong effort, it was announced Monday, leaving many unanswered questions behind one of South Korea's worst maritime tragedies.

Wrapping up a 13-month investigation, the eight-member panel concluded that the cause of the Sewol sinking could be either problems with the ship or an unknown external shock.

Problems with the ship could include a sudden turn of the ship, excessive cargo load and substandard refurbishing of the vessel that could have affected it stability and buoyancy, while external factors could be collision with a submarine or other unknown objects, the panel said.

The panel, composed of maritime experts and lawyers, was effectively divided over how the 6,800-ton vessel sank off the southwestern coast of South Korea while en route to the resort island of Jeju, on April 16, 2014. The accident claimed 304 lives, mostly high school students on a school trip.

The panel submitted its investigation report to President Moon Jae-in and decided to preserve the wreckage that was raised to carry out an in-depth probe and to raise public awareness of the tragic accident. A final decision will be made on whether to preserve the ship after getting feedback from bereaved families and others. 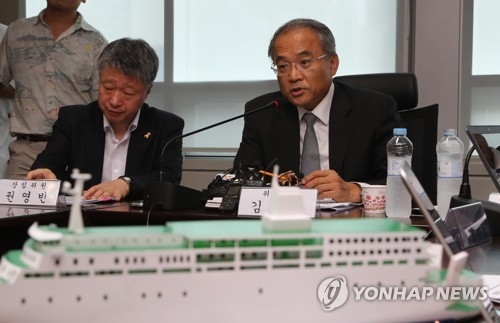