BEIJING/SEOUL, Aug. 6 (Yonhap) -- The nuclear envoys of South Korea and China on Monday discussed the issue of declaring a formal end to the 1950-53 Korean War as part of a process to foster a lasting peace on the peninsula.

Lee Do-hoon, representative for Korean Peninsula peace and security affairs, met his Chinese counterpart, Kong Xuanyou, in Beijing to strengthen the two countries' cooperation over security and other issues.

"What is positive is that South Korea and China had a considerable convergence of views on the Korean Peninsula issues," he added.

Asked if China is considering participating in the political declaration, Lee said, "(China) is not talking about it unequivocally, but we are discussing (the issue) with that possibility open."

Pyongyang wants it to happen soon, apparently believing that such a declaration will help ensure the security of its regime. However, Washington appears cautious, demanding the North first take tangible steps toward denuclearization. 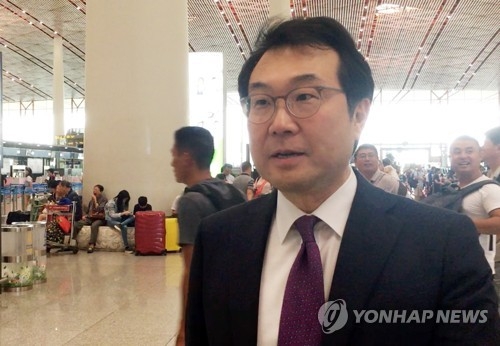