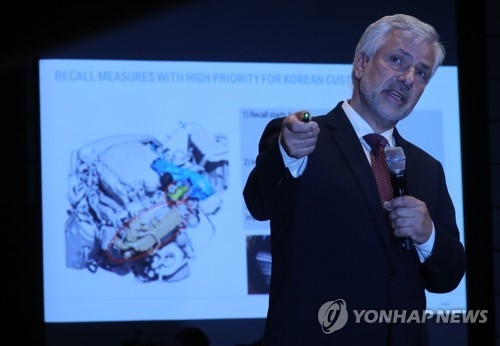 BMW used the same software and hardware for its vehicles sold in Europe and Korea.

The EGR-caused failure rate in diesel-powered BMW vehicles sold in Korea is 0.10 percent, similar to 0.12 percent in BMW diesel cars sold globally, the carmaker said, without giving a specific timeframe.

However, the company didn't explain why EGR-related fires are concentrated in Korea this year.

Meanwhile, two groups of Korean consumers filed a joint suit against BMW over the faulty part. More consumers are set to take legal action against the German company in the coming weeks.

Last week, the transport ministry urged owners of BMWs not to drive their vehicles until safety issues are fully resolved.

The ministry said it will as quickly as possible investigate what caused the fires in a thorough and transparent manner. It also vowed to review existing laws and regulations involving the recall system to prevent carmakers from taking advantage of loopholes that could jeopardize public safety.