Hwang is one of the 20 players selected to represent South Korea in the men's football tournament at the 2018 Asian Games. The Gamba Osaka forward is also one of the three overage members on the squad.

The men's football competition at the Asian Games is open to players 23 or younger, but countries can select up to three players over that age limit. Hwang, who turns 26 on Aug. 28, joins Tottenham Hotspur attacker Son and Daegu FC goalkeeper Jo Hyeon-woo as South Korea's wild card members

Hwang said he wants to score lots of goals at the Asian Games with his teammates.

"(Son) Heung-min has good finishing touches and powerful shots," Hwang said to reporters at the National Football Center in Paju, north of Seoul, ahead of training. "If we can create space for each other, we'll have lots of scoring opportunities." 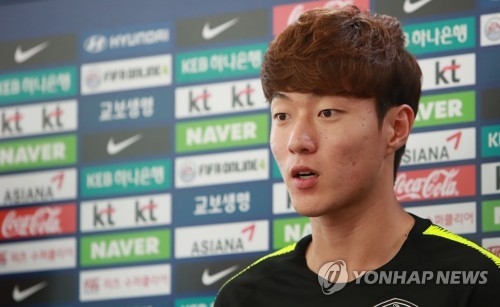 Hwang was a controversial pick by under-23 football coach Kim Hak-bum as some fans cast doubts over the striker's quality. While the other two wild cards -- Son and Jo -- played at this year's FIFA World Cup, Hwang wasn't even on the national team.

Others drew a connection between Hwang and Kim as they worked together at Seongnam FC from 2014 and 2016. Kim, however, denied claims that he selected Hwang for personal reasons.

Hwang said he is determined to prove his worth at the Asian Games by scoring goals.

"I heard many people talking about me," he said. "But I don't really want to think about what other people say. I just want to focus on my form and get to know my teammates quickly so that we can unite as a team."

Hwang has been performing well in the J-League this season. He is currently third in scoring with nine goals in the league. Including cup competitions, he has netted 14 goals for Gamba.

"My team and teammates are helping me a lot," he said. "I think I'm having a good form this season and I hope I can continue."

Hwang, who has 11 caps with the senior national team, is wearing the South Korean jersey for the first time since October 2017. He said he feels more responsibility than in the past.

"My heart was pounding when I entered the NFC and I feel some responsibility," he said. "I will try to stay in shape and show good performance."

South Korea are scheduled to kick off their Asian Games title defense in Group E facing Bahrain on Aug. 15 and Malaysia on Aug. 17. They will take on Kyrgyzstan on Aug. 20.

The Korea Football Association (KFA) said the men's team will depart for Indonesia on Saturday. It added two Europe-based attackers -- Lee Seung-woo and Hwang Hee-chan – who will join the team on Wednesday. Son will be the last player to report to the team as he'll work with Kim's side from next Monday.