At the 2016 Rio de Janeiro Summer Olympics, Park, then an unheralded fencer at age 21, rallied from a 14-10 deficit against Geza Imre of Hungary in the final, winning five straight points to capture the least expected of South Korea's nine gold medals. 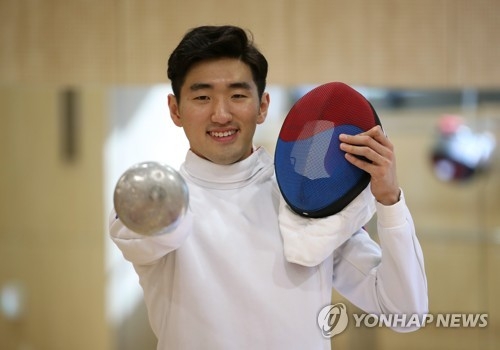 He has since gone through some ups and downs, but with the Asian Games in Indonesia less than two weeks away, Park seems primed for more appearances on the podium.

Park and his three epee teammates won the silver medal at last month's world championships in China. They're the No. 1-ranked team in the world.

Park will also try to win his first individual gold medal at the Asian Games. Four years ago in Incheon, 40 kilometers west of Seoul, Park was a member of the gold medal-winning team, but didn't even get to compete in the individual event. He watched his two teammates, Jung Jin-sun and Park Kyoung-doo, win gold and silver.

"I feel a bit of pressure, but since this will be new experience for me, I am also quite excited," Park said Monday during the national team media day at the Jincheon National Training Center in Jincheon, 90 kilometers south of Seoul.

"I know all the great fencers that have come before me have won individual gold medals at the Asian Games," Park added. "But I'll try to focus solely on my own performance, and not worry about anything else. Since the Asian Games are held only once every four years, I'll try to enjoy the experience."

The Olympic gold in Rio turned Park into an overnight sensation, and the baby-faced athlete with an easy smile quickly became an omnipresent figure in TV commercials. But Park said he soon realized fame was fleeting and he shouldn't get caught up in hype.

"I started worrying too much about what others thought, and I often rushed things on the piste," Park said. "I learned that maybe people weren't as interested in me as I once thought, and that I just had to slow things down." 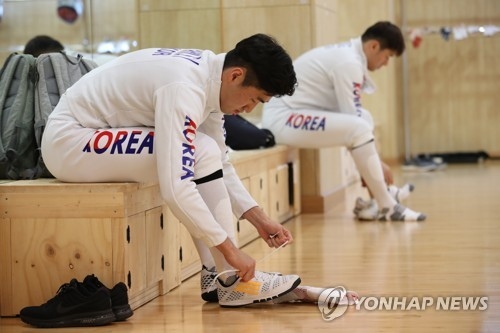 As much as he'd like to win an Asian Games gold, Park said such a victory would not mean any more than other international titles he's won. At least that's the pep talk he's giving himself because, "I am just not the type who thrives under pressure."

If Park can't win an individual title, defending the team gold medal would be a nice consolation prize. Park, the youngest member of the quartet at 23 and the only one in his 20s, said he believes his team can go up against anyone in the world, not just in Asia.

But Park said he should also guard against overconfidence.

"Because we've been doing so well, everyone will try to figure out ways to beat us," he said. "We may be on the top of our game, but we could also be facing our biggest challenge yet."