South Korea will be a heavy title favorite in the men's sabre team event at the Aug. 18-Sept. 2 Asian Games in Jakarta and Palembang, Indonesia, and Kim, 34, believes his team will come through. 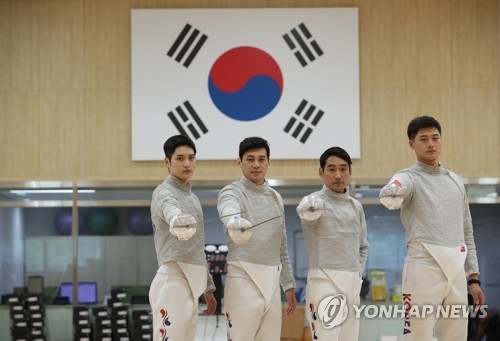 Kim is joined by Gu Bon-gil, a 29-year-old who teamed up with Kim for the team gold at the 2012 Olympics. Two other members are 24-year-old Kim Jun-ho and 21-year-old Oh Sang-uk, who have been with the two veterans for the past two world championships.

"In most countries, teams usually have four fencers of pretty much the same style, but the four of us are all different," Kim said Monday at the Jincheon Training Center in Jincheon, 90 kilometers south of Seoul, where the fencers are gearing up for the Asian Games.

"I think we have the right balance. Bon-gil and I have been together since 2012, and we have the experience and mental toughness. Then we have two young guys (in Kim Jun-ho and Oh) who are so physically gifted. And since we know each other so well, we're also able to identify and fix problems within the team very quickly," he said.

Having spent more than a decade on the national team, Kim said South Korea has never been this strong across the board. At this year's world championships, South Korea grabbed two gold, two silver and three bronze medals to rank second overall -- its best performance ever -- behind Italy. South Korea was also the only nation to reach the semifinals in all six team events. 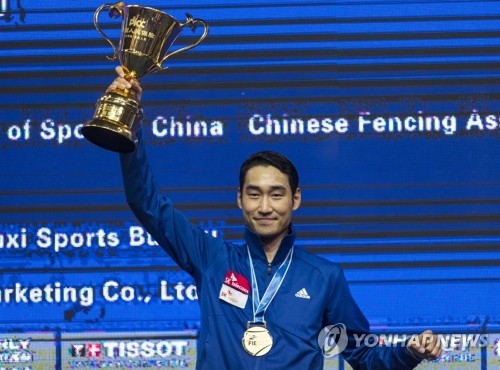 "The world championships used to be so difficult that everyone would be partying if we won just one medal," Kim said. "It's not just sabre. We're among the world's best in every event, and we'll top the medal table at the Olympics sooner rather than later. We're capable of winning gold medals in any discipline."

Kim won both the individual and team gold at the 2014 Asian Games in Incheon, 40 kilometers of Seoul, but won't be defending his individual title this month. Teams can only have two fencers each in the individual race, and Kim will be the cheerleader for Gu and Oh.

"I don't think I have enough left in my tank to compete in both events," Kim said. "In the team competition, I'll be like a relief pitcher in baseball, someone who steps in when the going gets tough and saves the day for the team."

As his career is winding down, Kim said he was grateful to his younger teammates for keeping him motivated and making sure he never lost the joy of competing.

"I can see that our young fencers have really made great strides," Kim added. "I'd love to share with them what little wisdom I have so that they'll continue to win gold medals after I am gone."