South Korea's 20-man squad for the Jakarta-Palembang Asian Games includes five forwards and two of them -- Son Heung-min and Hwang Ui-jo -- are overage players known as wild cards. The men's football tournament at the Asian Games is open to players aged 23 or under, but teams can field three players who are over that age limit.

Kim said it was necessary to pick many forwards because South Korea needs to diversify their scoring options against Asian opponents who usually sit back and look for counter attacks.

"If we have one attack option and expose it to our opponents, then we'll have no solution," Kim told reporters ahead of training at Paju Stadium in Paju, north of Seoul. "I picked many forwards so that we can have various scoring options and I have big expectation for Hwang Ui-jo." 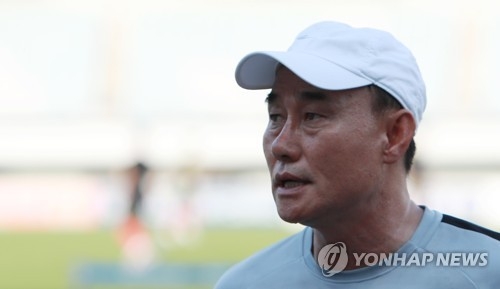 Kim emphasized that it was offense that mattered at the Asian Games, not defense.

"If you look at the Asian Games, we rarely had matches conceding lots of goals," he said. "The game changes depending on whether we score or goals or not, and we need players who can poach goals."

Kim said he wants Red Bull Salzburg forward Hwang Hee-chan to upgrade his finishing touches around the net. The 22-year-old has been performing well with his Austrian club, but hs been relatively silent with the national team. He has two goals in 16 matches with the U-23 side.

"Hwang Ui-jo and Son Heung-min have scoring power, but Hwang Hee-chan is a player who needs improvement," he said. "Those who scored goals can score lots of goals."

Kim's team will depart for Indonesia on Saturday. Son will travel separately as he will join the team next Monday after playing in Tottenham Hotspur's English Premier League opener against Newcastle United on Saturday. Two other Europe-based players -- Lee Seung-woo of Hellas Verona and Hwang Hee-chan -- will be able to train with the squad from Wednesday.

"Hwang (who was scheduled to report to the team on Friday) was able to join the team early with his strong determination," he said. "It's really hopeful that we can train with these players even though we'll have only a short period of time." 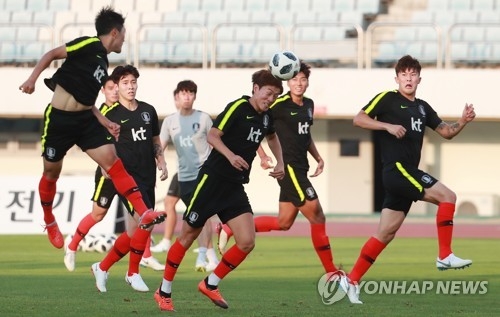 South Korea will open their Asian Games defense against Bahrain on Aug. 15 before facing Malaysia on Aug. 17 and Kyrgyzstan on Aug. 20. The Taeguk Warriors were originally to start their Asian Games Group E campaign on Aug. 12 against the United Arab Emirates (UAE), but the Middle East nation was moved to Group C after Iraq decided withdraw from the Asiad and made South Korea to play three matches in the group stage.

Kim said it's really fortunate that his side has a lighter schedule after the redraw. South Korea originally planned to fly to Indonesia on Wednesday.

"Although it doesn't really matter in the group stage, we'll get more stress when we play more matches," he said. "In Indonesia, we're allowed to train in only certain period of time that is allocated to us. We pushed back our departure date so that we can have more training before entering the competition."