SEOUL, Aug. 7 (Yonhap) -- Samsung Electronics Co. plans to showcase the Galaxy Note 9 phablet this week, which is expected to come with the largest battery and storage among the company's premium smartphone lineup, industry sources said Tuesday.

The South Korean tech giant plans to introduce the Galaxy Note 9 on Thursday in the United States.

While Samsung has not yet provided details except for a few teaser clips, sources said the new smartphone is likely to come with a battery capacity of 4,000 mAh and a screen size of 6.4 inches. The handset may also come with a version supporting a whopping 512-gigabyte storage capacity.

Last month, Samsung showcased teasers for the upcoming Galaxy Note 9 smartphone, highlighting improved performances in terms of battery capacity, memory and speed. The videos described situations where users can get frustrated due to low battery, lack of storage space and slow download speed.

During the investors-relations conference held at end-July, Samsung Electronics said it will sell the Galaxy Note 9 at a reasonable price to improve sales of its mobile division.

Samsung's IT and mobile division, which oversees the smartphone business, posted an operating profit of 2.67 trillion won in the second quarter of 2018, falling 34 percent from 4.06 trillion won tallied a year earlier.

The company attributed the sluggish performance to the weak sales of the Galaxy S9, along with increased marketing expenditures.

The preorders for the Galaxy Note 9 will start next Tuesday, with the official released slated for Aug. 24 in South Korea, sources said. The release date is expected to give it a head start compared with its archrival Apple Inc.

Apple plans to take the wraps off its new smartphone next month. 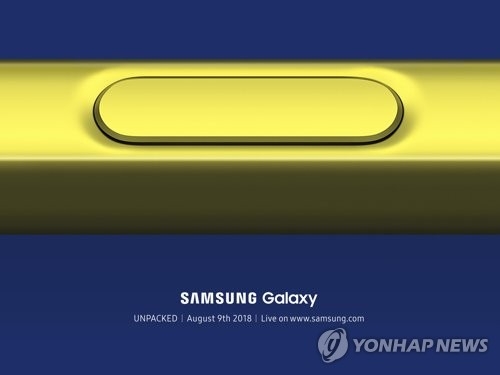