SEOUL, Aug. 7 (Yonhap) -- The government will cut the electricity rate for households temporarily for July and August amid a heat wave that has scorched the nation for weeks, the energy minister said Tuesday.

Paik Un-gyu, the minister of trade, industry and energy, made the remark at a meeting of government and ruling Democratic Party (DP) officials to come up with measures to ease households' burdens of higher electricity bills amid sweltering weather.

"The government seeks to ease the incremental electricity rate in July and August," the minister said at the start of the meeting. "We also plan to help the underprivileged stay cool."

The meeting came as the country has been gripped by extremely hot weather for weeks with temperatures in Seoul hitting a record 39.6 C last Wednesday. The record-breaking heat wave raised concerns about higher electricity bills for households.

President Moon Jae-in instructed senior government officials Monday to draw up measures to ease the burden on households caused by the incremental electricity rate for July and August, and increase the discounts for power rates for low-income families and social welfare facilities.

South Korea applies incremental electricity rates only to households, which are charged higher rates the more electricity they use.

The system puts heavier burdens on households than industries, whose electricity rates change depending on the season and time.

Electricity for industrial use accounts for more than half of the country's total energy consumption.

The minister also stressed that the country has no problem in managing power supply and demand.

"The country has increased its capacity for power supply and secured electricity reserves," he said.

His ministry earlier forecast that energy demand in August is likely to top July's record high of 92.5 million kilowatts (kW). The government said that the power reserve reaches some 6.81 million kW.

At Tuesday's meeting, government and DP officials will decide how much the incremental electricity bills will be curtailed, according to party officials.

Participants in the meeting included Hong Young-pyo, the floor leader of the DP, and Minister Paik.

"The National Assembly plans to revise a law in August that designates heat and cold waves in the form of natural disasters," Hong said at the start of the gathering. 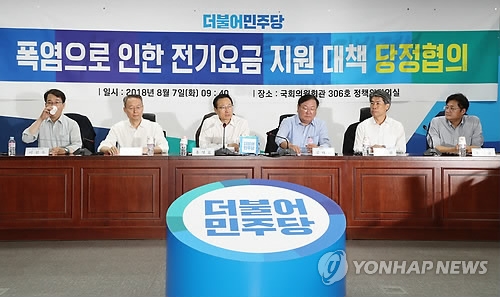