Kim emerged from the special counsel's office at about 3:50 a.m., looking fatigued but wearing a smile.

"I explained myself sufficiently and in detail," he told reporters. "I cooperated with the investigation with confidence."

Asked whether the special prosecution showed him any "smoking gun," Kim said, "I don't believe there was any, or anything that proves to be one."

He was summoned for questioning on Friday over allegations he was involved in a massive manipulation of comments on Internet news articles to sway public opinion in favor of the ruling Democratic Party (DP).

The former DP lawmaker who just won his governorship in June local elections is suspected of either being actively engaged in the scheme or being regularly briefed about it by Kim Dong-won, better known by his nickname Druking, and his crew.

Special investigators suspect that Kim worked with them to artificially jack up the number of likes for Internet comments attached to news articles about the DP, then the opposition bloc, between 2016 and early 2017.

Kim is also suspected of offering the position of consulate general in the Japanese city of Osaka to Druking while asking for help in this year's elections.

Kim has denied the allegations.

The scandal has become a hot-button issue because of the potential political repercussions it could have on the ruling liberal bloc. Kim is also known for his close ties with President Moon Jae-in. 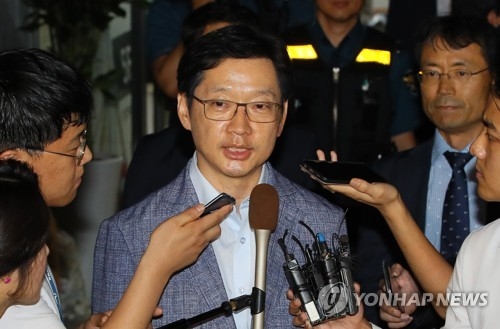