SEOUL, Aug. 7 (Yonhap) -- South Korean airlines' foreigner passenger income rose in the first half of 2018 after falling for six years in a row, helped by recovering travel demand from China, the central bank said Tuesday.

The country's eight carriers earned US$1.98 billion by transporting foreign passengers, marking a rebound from negative growth tallied since 2012, the Bank of Korea (BOK) said.

"Chinese travelers are coming back to Korea this year after Beijing lifted a ban on the sale of tour packages that were imposed after a diplomatic row erupted between the two countries," a BOK official said.

China had explicitly opposed the deployment of an advanced U.S. missile defense system, called THAAD, in South Korea, although Seoul stressed the move was aimed at countering the threat from North Korea. Beijing has maintained that the system jeopardizes its security. 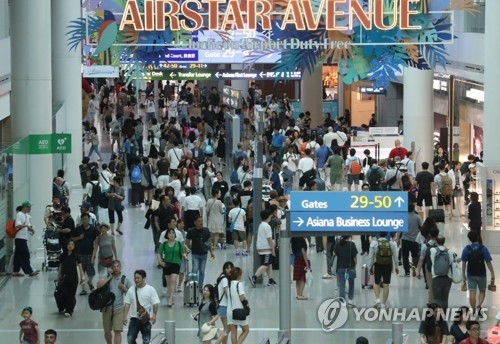