FIFA's international match day calendar shows that teams can have friendlies between Oct. 8 and 16. According to the official, the Korea Football Association (KFA) is currently searching for teams that can play friendlies with South Korea during that period.

"We are currently talking with teams that we had contacted for tune-up matches before the 2018 FIFA World Cup," the official said. "We'll soon announce our October friendly opponents once details are finalized."

For friendly matches next month, South Korea will face Costa Rica in Goyang, north of Seoul, on Sept. 7 and Chile in Busan on Sept. 11.

Like the September friendly matches, the official said South Korea are likely to play against non-European opponents in October because European teams will be busy preparing for the inaugural Nations League.

Organized by the Union of European Football Associations (UEFA), the Nations League will feature 55 teams and will take place from September to November for the league phase and the finals will be held in June 2019.

"It's difficult to arrange friendly matches with European and African nations during that time because they will participate in their own continental competitions," the official said. "For these reasons, we'll be able to play against teams from North and Central America, South America and Asia."

The official, however, denied reports that South Korea will have a friendly match with Iraq in October.

"Our under-23 national team planned for a friendly with Iraq ahead of the Jakarta-Palembang Asian Games but not for the senior national team," the official said.

The official added that the October friendlies will take place on Oct. 12 and 16, and the exact location and time will be determined later.

The KFA is currently searching for a new boss for the men's national team. The new head coach will make his South Korea debut at friendlies in September, the official added. 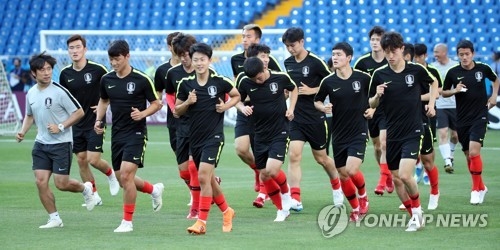