SEOUL, Aug. 7 (Yonhap) -- President Moon Jae-in on Tuesday called for steps to remove excessive and unnecessary regulations in the financial sector as a way of allowing new businesses, such as Internet-only banks, and increasing market competition that he said will eventually benefit consumers.

"Regulations can increase the value of a new industry but also prevent one," the president said in a special meeting to discuss government deregulation, especially in the banking sector.

"I have always stressed that the speed and timing are keys to regulation reform for innovation-led growth. We may become leaders of the fourth industrial revolution when we innovate our regulations in time," the president told the meeting, attended by some 150 government officials, including the head of the financial watchdog, and officials from the country's Internet-only banks. 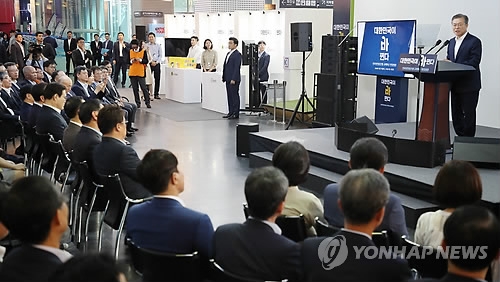 The president said the Internet-only banks have brought new competition to the market since their launch about a year earlier, but that they continue to face difficulties due to regulations that he said may prevent fair competition.

"Until now, our financial market has been centered around existing financial firms. While those financial firms that are already in the market enjoy oligopolistic profits without having to innovate or face competition, newcomers with innovative ideas are unable to even enter the market due to regulations that create market barriers," the president told the meeting.

"Revitalizing Internet-only banks will promote competition and innovation of the entire financial sector," he said, proposing the government ease related regulations at least for such banks.

Such regulations include the separation of banking and commerce that limits the ownership of a nonfinancial firm in any financial company to 4 percent.

"The people desperately want financial innovation. Internet-only banks must be allowed to become strong competitors if we are to make them standard-bearers of innovation in the financial industry," Moon said.

The president insisted the move will also lead to the development of other new businesses, such as fintech, that he said will become a new engine of growth.

Several bills have been submitted to the National Assembly that would allow nonfinancial firms to raise their stakes in Internet-only banks to up to 50 percent.

During the meeting, Financial Services Commission (FSC) Chairman Choi Jong-ku said the financial regulator will step up cooperation with the National Assembly to pass the bills for Internet-only banks.

The FSC will also speed up its reforms in regulations for financial technology innovation and the future of financial services.