(ATTN: RECASTS headline and throughout with updated info)

SEOUL, Aug. 7 (Yonhap) -- Unionized workers at South Korean banks voted Tuesday to go on strike amid a feud with management over the introduction of the shorter workweek system and other key pending issues, officials said.

The decision was made in voting that ended at 6 p.m., according to the officials. The workers' detailed action plan will be announced on Thursday.

Preliminary counting showed that more than 80 percent of the workers participated in the voting, of which over 90 percent approved the move, an official said.

Some 100,000 workers at 33 local lenders and relevant institutions under the Korea Financial Industry Union, including KB Kookmin, KEB Hana and Woori Banks, began to vote earlier in the day.

The labor and management of the financial firms have failed to find middle ground regarding the implementation of the new workweek system that calls on companies with more than 300 employees to reduce the maximum weekly working hours to 52 from the previous 68 hours.

The two sides also have been at odds over amending the extension of the retirement age and the wage peak system, according to the officials.

The bank workers have staged three general strikes so far, with the latest in September 2016 in protest against the introduction of a performance-based pay system. 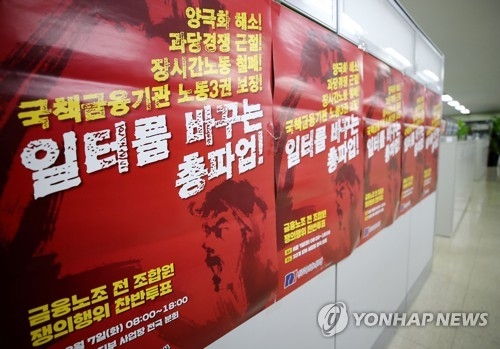