After failing to qualify for the 2016 Rio de Janeiro Olympics, Shin said Tuesday that the upcoming Asian Games will be an opportunity to prove that he is still capable of standing on the top of the podium.

"I really wanted to win a medal at the Rio Olympics, but I didn't get a chance to compete," Shin told Yonhap News Agency at the launching ceremony of the South Korean delegation for the Jakarta-Palembang Asian Games. "I still want to prove that I can be at the top. It's my third Asian Games, and some people say I didn't train hard. But I want to show them that I have really worked hard." 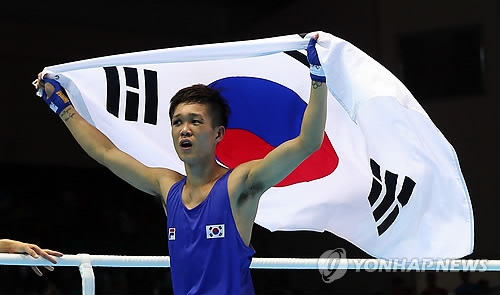 Shin said that high-ranked boxers in his weight class, light flyweight (under 49 kilograms), are mostly Asians, and the Asian Games will give him tough challenges.

"I can't let my guard down because all of the fighters are tough opponents," he said. "I think my physical condition and luck on match day could determine the result."

Shin took gold in the men's light flyweight division at the 2014 Asian Games in Incheon. For his title defense, the 29-year-old said he tries to stay relaxed.

"In my first Asian Games (in 2010), I thought about too many things, such as winning medals and military exemptions, and I didn't perform well," he said. "For the Incheon Asian Games, I cleared my head and focused only on my bouts. This time, I feel more comfortable, and I'm trying to enjoy my game."

Shin said he is confident that he can win another Asian Games gold if he can manage to stay healthy.

"What's really important is that I have to have a healthy body to fight in the ring," he said. "If I get injured before the competition, that's a big problem."

Shin said dropping weight may be a major challenge in his preparations.

"I didn't lose much weight before the bout, but this time I have to lose three to four kilograms," he said. "If I was used to losing weight, it might not be a big problem, but it's going to be hard for me. As I get older, I gain weight faster and so it's something I need to get prepared for."