POHANG, South Korea, Aug. 7 (Yonhap) -- A man stormed into a bank in the southeastern city of Pohang on Tuesday, escaping with 4.56 million won (US$4,049) in cash minutes later, police said.

The man wearing a pair of black sunglasses, a black facial mask and a hooded T-shirt entered an outlet of the Korean Federation of Community Credit at 11:48 a.m. before demanding that a clerk put money into a bag he brought while brandishing a knife.

The outlet's staff put the cash, including 90 50,000-won bills, into the bag, and the robber drove away in a white passenger car that he parked outside of the bank. The heist took only two to three minutes.

At the time of the heist, there were six staffers and two customers. But none of them were hurt, police said.

Police arrived at the scene four minutes after the robber fled.

The bank staff said the robber had a voice that made him appear to be in his 30s or 40s and had a slim body. They were not able to get a look at his face due to the mask.

Police are tracking him through CCTV footage obtained near the bank and are checking to see if he had any accomplices. 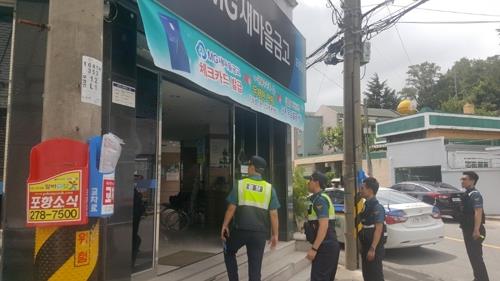 Bank robber speeds away after 4.5 mln-won heist in Pohang

Bank robber speeds away after 4.5 mln-won heist in Pohang