SEOUL, Aug. 7 (Yonhap) -- The unified Korean women's basketball team for the upcoming Asian Games is training in a great atmosphere, its captain relayed on Tuesday.

South Korean forward Lim Yung-hui said the nine South Koreans and three North Korean players on the combined team are all working toward the same goal -- to win the gold medal at the Aug. 18-Sept. 2 Asian Games in Jakarta and Palembang, Indonesia.

"Though we're pressed for time, we've been training in a positive atmosphere since the North Koreans joined us," Lim said during the South Korea delegation's launch ceremony at SK Olympic Handball Gymnasium in Seoul on Tuesday. The three North Korean players, Ro Suk-yong, Jang Mi-gyong and Kim Hye-yon, joined Lim and the other South Koreans last Wednesday. 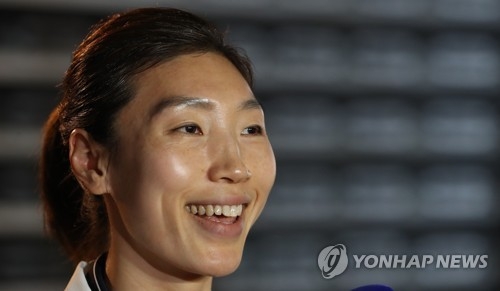 "We still need to work on our game, but we should have enough time once we get to Indonesia," Lim added. "So we're trying to pick each other up and to get on the same page."

South Korea won the gold at the previous Asian Games four years ago and now faces the unique challenge of trying to bring three new faces into the rotation without affecting chemistry among existing players.

Lim admitted to feeling the burden of being the defending champion, but the infusion of fresh blood in the form of the North Koreans should only help the rest of the squad.

Lim added that the players are also experiencing less trouble in their communication. Because South Koreans are accustomed to English terms for basketball plays and North Koreans have their own set of jargon, they had problems understanding each other at first.

"We have no issues understanding one another now," she said. "Since they're mostly basketball terms, we've grown used to different words over the course of our training."

In addition to captaining the basketball team, Lim will be the South Korean flagbearer when the two Koreas march behind the Korean Unification Flag at the opening ceremony. North Korea will have a male flagbearer to join Lim at the head of the joint delegation.

The Korean team will face Indonesia to open Group X action on Aug. 15. Other opponents will be Taiwan on Aug. 20, India on Aug. 24 and Kazakhstan on Aug. 26.

The top four teams from Group X will advance to the quarterfinals, joined there by the top four from Group Y, made up of China, Japan, Thailand, Hong Kong and Mongolia. 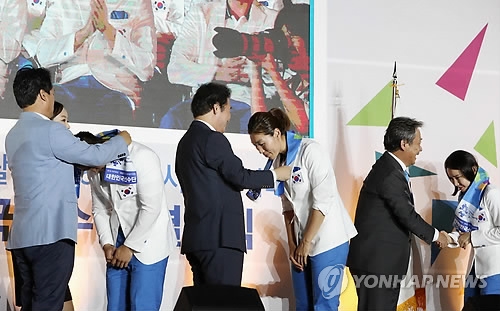