Prosecutors asked Kim Ki-choon, 79, who served as aide to ousted President Park Geun-hye, to present himself at the Seoul Central District Prosecutors' Office at 9:30 a.m. on Thursday.

Prosecutors are investigating allegations the top court, under the previous Chief Justice Yang Sung-tae, used politically sensitive trials as bargaining chips to curry favor with Park's office so as to win presidential approval for the establishment of a court of appeals, Yang's long-envisioned plan.

Prosecutors are expected to grill Kim over these allegations and whether he had knowledge of any deal made between Yang and Cheong Wa Dae. Kim served as Park's chief of staff from 2014-15.

Prosecutors have obtained evidence suggesting Yang tried to use a case involving Korean victims of Japan's forced labor during World War II to curry favor with the presidential office that was seeking amicable relations with Tokyo.

Lim Jong-hun, then deputy chief of the National Court Administration under the Supreme Court, is suspected of visiting the presidential office in October 2013 and holding talks with one of the presidential aides about the case.

If Kim shows up for the questioning, it will be yet another inglorious appearance by the veteran prosecutor-turned-politician. Kim was released on Monday as his arrest warrant expired after over a year of presentencing detention.

Kim has been on trial for a string of power abuse and other charges in connection with a massive corruption scandal that led to Park's removal from office last year. He was freed as the court turned down prosecution's request for another extension of his arrest. 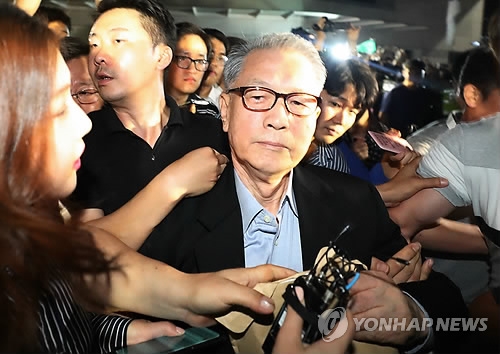