SEOUL, Aug. 8 (Yonhap) -- Although she has won various international competitions, there's one thing that South Korean sport climber Kim Ja-in has yet to conquer: winning a gold medal at the Asian Games.

Kim is one of the top South Korean sport climbers of her generation. The 29-year-old won the 2014 International Federation of Sport Climbing (IFSC) World Championships in lead and claimed 26 gold medals in the IFSC Climbing World Cups.

While she had represented her country numerous times in IFSC competitions, Kim will make her first Asian Games appearance later this month. Sport climbing wasn't a medal sport at the Asiad until this year's edition in Indonesia.

Kim said everything feels new since participating in a multisport event is something she hasn't experienced before.

Kim's main discipline is lead, but for the Asian Games, only speed, speed relay and combined -- which climbers are evaluated after competing in speed, lead and bouldering events -- will be played. Kim will participate in the combined category at the 2018 Asian Games.

"I'll have some pressure because it combines all three disciplines to choose the winner," she said. "For the remaining time, I need to manage my physical strength and increase my speed."

At the Asian Games, Kim said Japanese climbers will be the toughest opponents.

"Akiyo Noguchi, who has been competing with me for last 10 years, is very good in her main discipline bouldering, as well as lead and speed," she said. "Japan has many top-class climbers, so it's going to be a tough challenge."

Kim said although it is impossible to do well in all three disciplines, she will try her best to win the gold.

"It's not easy to predict the result, but I just want finish my events without regrets," she said. "My goal is obviously to win a gold medal, and I hope sport climbing can be recognized by many people through these Asian Games." 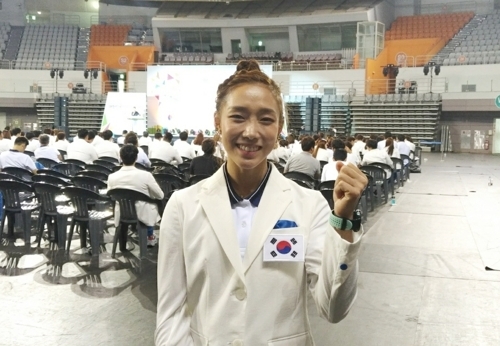