Trump made the proposal in his most recent letter to North Korean leader Kim Jong-un, according to U.S. National Security Adviser John Bolton. The letter was delivered to the North's foreign minister during last week's regional gathering in Singapore. Pompeo also took part in the meeting.

"Secretary of State Mike Pompeo is prepared to go back to North Korea to meet with Kim Jong-un. We've proposed that in our most recent letter from the president to Kim Jong-un," Bolton said in an interview with Fox News. 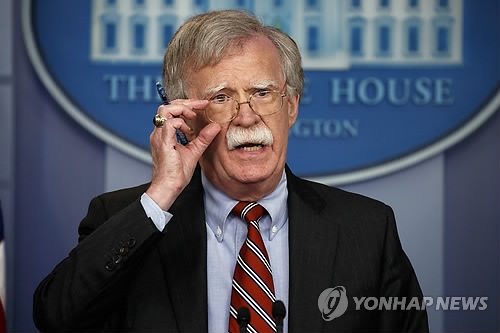 Pompeo has made three known trips to Pyongyang. On his first two trips, he met with Kim and laid the groundwork for the first-ever meeting between a U.S. and North Korean leader.

Trump and Kim held a historic summit in Singapore in June that yielded a joint statement committing the North Korean leader to work toward the complete denuclearization of the Korean Peninsula. In return, the U.S. committed to provide security guarantees to the regime.

Pompeo made a third trip to Pyongyang after the summit to flesh out the deal, but reportedly made little progress on adding details to the denuclearization plan.

Contrary to what the White House announced beforehand, he also returned without being granted a meeting with Kim.

"We have no trips, no travel to announce at this time," State Department spokeswoman Heather Nauert told reporters on Pompeo's next trip to North Korea.

Asked about plans for a second meeting between Trump and Kim, Bolton said there aren't any but that the president is "prepared to meet at any point."

"But what we really need is not more rhetoric. What we need is performance from North Korea on denuclearization," he added.

The hawkish adviser dismissed North Korea's calls for an easing of sanctions on the regime, saying the Trump administration will continue enforcing them until Pyongyang denuclearizes.

"The United States has lived up to the Singapore declaration. It's just North Korea that has not taken the steps we feel are necessary to denuclearize," Bolton said. "The idea that we're going to relax the sanctions just on North Korea's say-so, I think, is something that just isn't under consideration."

The repatriation was part of the agreement reached by Trump and Kim at the summit.

Bolton played down the significance of the move as it relates to denuclearization.

"What a nation that was truly committed to turning the page would do here is return the remains of all the foreign soldiers," he said, citing troops from South Korea, Australia and other nations that fought in the war. "There's no point in withholding the remains from a conflict that long ago. If they really want peace on the peninsula, as they say, they don't need any negotiations with us to do it. They can do it on their own."