SEOUL, Aug. 8 (Yonhap) -- Prices of vegetables jumped more than 5 percent last week from the week before as the heat wave continued, while the price of ice cream fell by over 40 percent, data showed Wednesday.

According to a portal operated by the Korea Consumer Agency that tracks food costs, vegetable prices increased 5.4 percent as of Friday from the previous week. Processed seafood became 7 percent more expensive, and fish 2.4 percent.

For vegetables, the price of cabbage was up the most, climbing 41.2 percent. Spinach was 33.4 percent more costly. In all, 13 of 21 vegetables measured for the data had increased in price.

In processed seafood, the price of dried laver for making kimbap, rice rolls with a variety of vegetables, was up 7.3 percent. That for canned tuna was up 6 percent. On average, the sector showed a 7 percent hike.

Prices for summer foods, including snacks and ice products, were down 3.6 percent. Prices of meats fell 3.5 percent, and for tea, beverages and alcohol, they were down 2.2 percent.

The cost of beef, which had jumped previously from cows dying from heat, fell 8.7 percent. Eggs were priced down 5.1 percent, and pork down 4.8 percent. The price of chicken was up 2 percent 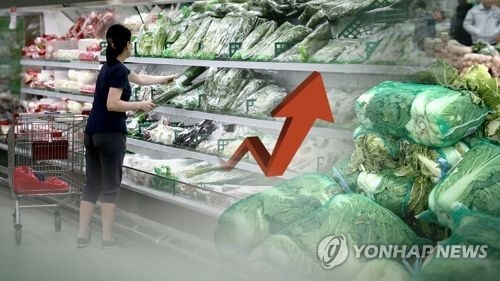