The BP plans to hold its convention on Sept. 2 to elect a new leader after former co-leaders resigned following its defeat in the June local elections.

Sohn, 71, said that he will do his best to prompt the BP to play a central role in driving reform in Korean politics.

"On my final mission, I will (make efforts to) change the current political system," he told a press briefing.

The BP is facing its biggest crisis following a huge defeat in the June 13 local elections and parliamentary by-elections. It won none of the 17 big-city mayoral and gubernatorial posts and 12 parliamentary seats in the first nationwide polls for the party.

Currently, the party holds 30 seats in the 299-member National Assembly.

Ahn Cheol-soo, one of the party's founders, said last month that he will stay away from the political scene for a while after he finished in third place in the Seoul mayoral race.

The BP came into being in February through a merger of two center-right and center-left parties, in what is seen as a bold experiment in South Korea's politics long dominated by regional and ideological divisions.

Sohn's bid added to the return of political bigwigs to the main stage of politics, which some critics have called the comeback of "old boys."

Last month, Lee Hae-chan, a 66-year-old, seven-term lawmaker, was picked as one of three candidates for the chief of the ruling Democratic Party.

"Despite criticism and mockery at my decision, I've come to run for the post," Sohn said. "I am here with the thought that I will become a catalyst for the party's reform and innovation." 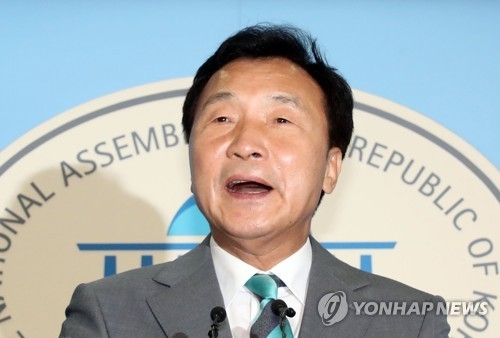