SEOUL, Aug. 8 (Yonhap) -- Foreign investors turned to net buyers in the South Korean stock market for the first time in four months in July as they scooped up local shares in the second-quarter earnings season, the central bank said Wednesday.

Foreigners purchased US$120 million worth of South Korean shares last month, swinging from net selling of $640 million tallied in June, according to the Bank of Korea (BOK).

They had remained net sellers since April, when they dumped $2.04 billion worth of South Korean stocks as intensifying U.S.-China trade disputes fueled uncertainties in the global financial sector.

This changed in July, as most local companies released their second-quarter earnings reports, which caused offshore investors to became bullish despite ongoing trade concerns.

On the bond market, offshore investors bought $1.31 billion worth of assets in South Korea, slightly down from $1.91 billion in the previous month. They have stayed net buyers since January.

In total, foreigners purchased a net $1.43 billion worth in the local equity market last month.

Meanwhile, the volatility in the dollar-won exchange rates narrowed slightly last month amid a steady upside trend of the U.S. greenback, the BOK said.

The average daily variation, showing the change from the previous session's closing price, came to 3.9 won in July, down from 5.2 won in the previous month. 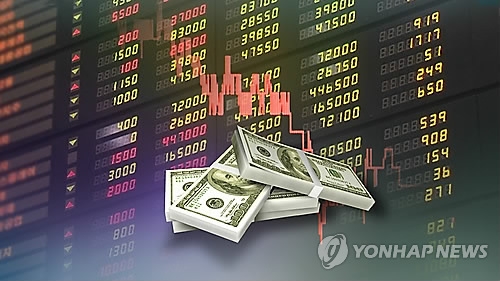