Lee, who has been serving as the de facto leader of Samsung Group since his father was hospitalized in 2014, was released from prison in February after serving nearly a year on his alleged connection to a political scandal that ousted former President Park Geun-hye.

The only son of Lee Kun-hee has refrained from making public appearances since being released from jail.

He did make a handful of overseas trips, visiting European countries, China and Canada to meet officials from various businesses, in an apparent bid to penetrate deeper into emerging businesses including artificial intelligence technology.

The major event came last month when Lee met incumbent President Moon Jae-in in India. There, Moon called for Samsung to make a contribution to the national economy to create more jobs.

Such talks are seen to have laid the foundation for a bigger-than-expected investment plan that includes the direct hiring of 40,000 new employees by the tech giant. The total investment pledge exceeds the market's earlier expectation of 100 trillion won and can be seen as the latest move by Samsung to rebuild its tainted reputation in South Korea.

Besides the latest move, Lee has been making concerted efforts to make amends for its ties to the disgraced Park administration.

More recently, Samsung inked an agreement to accept upcoming mediation on the long-standing dispute surrounding compensation for workers suffering from diseases after working at its production lines, which has lasted more than 10 years.

Despite high profile actions to contribute to society, Lee is expected to remain low-key for the time being, as the government is still seeking to slap more regulations on family-controlled conglomerates.

The vice chairman, who received a suspended sentence from an appellate court for the political scandal, must stand before the Supreme Court. 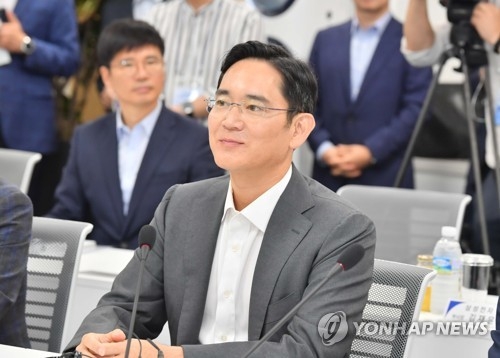 Samsung rolls out major investment in efforts to rebuild reputation

Samsung rolls out major investment in efforts to rebuild reputation