JINCHEON, South Korea, Aug. 8 (Yonhap) -- South Korea aims to win nine gold medals in taekwondo at this year's Asian Games, hoping it can reaffirm its reputation as the birthplace of the martial art.

South Korea will send 18 taekwondo practitioners -- 10 for sparring, also known as "kyorugi," and eight for poomsae -- to the Asian Games in Indonesia. All taekwondo events will be held at JCC Plenary Hall in Jakarta from Aug. 19-23.

Taekwondo has been a traditional gold mine for South Korea at multisport events like the Asian Games and the Olympics. According to the Korean Sport & Olympic Committee (KSOC), South Korea is looking to grab nine gold medals in taekwondo at the Jakarta-Palembang Asian Games, the most among any other sport.

"Our target is to win six gold medals in sparring, but we think we can grab up to seven," said Kim Jong-ki, head coach of the South Korean taekwondo national team at a media event at the National Training Center in Jincheon, North Chungcheong Province. "We really worked hard this time, and we think it will pay off."

Poomsae, which refers to an attack-and-defense pattern in taekwondo, will make its Asian Games debut. Six gold medals are offered in poomsae at the 2018 Asian Games.

Kwak Taek-yong, a coach for the poomsae team, said sports fans will enjoy watching the newly introduced discipline at the Asian Games.

"I'm sure those who don't know taekwondo well can also feel the beautiful and powerful moves of taekwondo," he said. "We will try to win all the events."

The athletes said they're determined to meet the expectations of fans. And for some taekwondo practitioners, they want to offer more than a gold medal.

"I want to play a fierce game," said Lee Dae-hoon, who is a two-time defending Asian Games champion in the men's 63-kilogram division. "I want to show powerful and speedy kicks, so that those who don't know taekwondo can think the sport is interesting to watch." 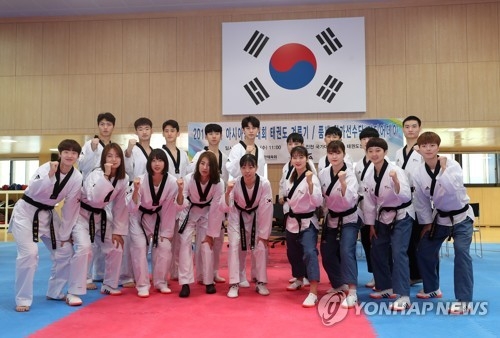