According to the sources here, Air Koryo, the North's flag carrier, recently increased its direct flights between Pyongyang and Shenyang, the capital of Liaoning Province, from two per week to three.

The temporary flight on Mondays may be intended to cope with the high aviation season but could turn into a regular flight as the North Korean carrier is determined to expand services on its Chinese routes, they said. 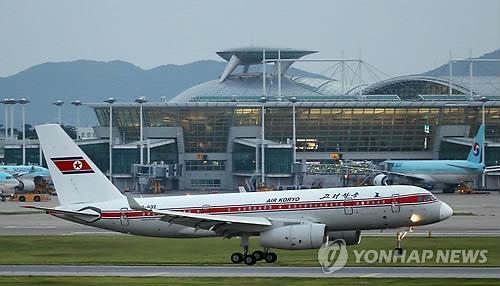 As the United States is likely to retain its sanctions on the North until its complete denuclearization, the Pyongyang regime appears anxious to induce more tourists from China to earn hard currency, they speculated.

"Following successive North Korea-China summit talks, more people expect an economic upturn in North Korea, as seen in the recent surge in the real estate prices in Dandong, a Chinese border city across the North's Sinuiju," a source said.

"Amid such an atmosphere, private sector exchanges between the two countries have been on the rise."

Meanwhile, the number of passengers on Pyongyang-Beijing trains has greatly increased, with almost every seat sold out on recent runs, other sources said.

More Chinese tourists are interested in Panmunjom, the venue of the inter-Korean summit in April, and some tourism agencies sold tour packages combining Pyongyang and Panmunjom on the occasion of the July 27 Korean War Armistice Day.
(END)