Kang, 17, is the youngest taekwondo practitioner to represent South Korea at the Summer Asian Games in Indonesia. She will compete in the women's under 49-kilogram division.

Despite being her first Asian Games, Kang said she believes her taekkyon-based moves will lead her to the gold medal. Taekkyon is another style of Korean martial art, which is characterized by fluid and dynamic foot movement.

"In taekkyon, you lose when you fall on the ground," Kang said to reporters at a media event at the National Training Center in Jincheon, North Chungcheong Province. "So for me, using taekkyon gives me some advantage in finding my balance. It's also good to use some taekkyon techniques when launching close range strikes." 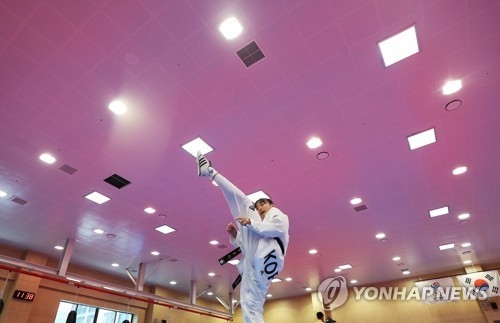 Kang learned taekkyon first before she practiced taekwondo. She said her kicks will give opponents a hard time.

"My taekkyon-based kicks come at different angles and trajectories than other traditional taekwondo kicks," she said. "I can put my opponents in trouble with these kicks because it will be difficult for them to predict them."

Kang, who recently topped the Asian Taekwondo Championships in her weight division, said if her taekkyon-based moves don't work in the first place, then she will edge opponents in the late phase of the bout with her strong stamina.

"In terms of physical endurance and stamina, I'm confident that I'm the best among women fighters here, and I think I can also keep up with male athletes," she said. "Some athletes burn out easily, but I'm working hard so that I can produce the same kick speed even in the third round of the bout."

Kang said her family is helping her prepare for the Asian Games in a comfortable environment. Kang's parents run a taekwondo-taekkyon gym in Seonju, North Gyeongsang Province, and her three siblings all do taekwondo.

In particular, Kang's younger sister, Mir, was named the MVP at the World Junior Taekwondo Championships in Tunisia earlier this year after winning the women's under 42-kilogram division.

"All my family members are familiar with playing sports, so they understand me very well," she said. "Mir, who is two years younger than me, sometimes trains with me as a sparring partner." 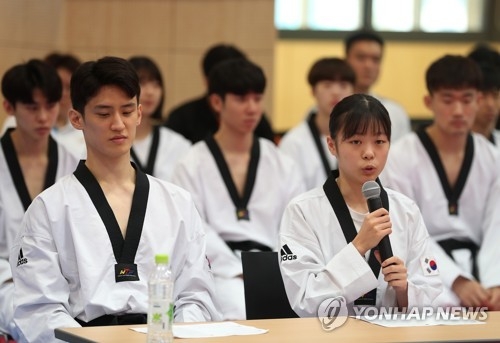 Kang's father, Ho-dong, said he has no doubt that his daughter will win the medal at the Asian Games.

"Bo-ra is very disciplined, and she works very hard," said Ho-dong, who works as a taekwondo coach at an elementary school in Seongju. "If she can mix up her moves, she'll do fine."