SEOUL, Aug. 8 (Yonhap) -- Samsung Electronics Co. on Wednesday declared that it will make investments worth a whopping 180 trillion won (US$160 billion) over the next three years, seeking to effectively overcome various challenges to its business and its relationship with a government that has maintained a tough stance on family-controlled firms.

The South Korean tech giant said the latest investment centers on building up its artificial intelligence, fifth-generation network, bio and automotive operations through the investment plan announced earlier in the day. Those areas are seen as Samsung's new growth engines.

The company said it wants to allocate considerable amount of funds in critical sectors, with artificial intelligence being especially significant for the fourth-industrial revolution. Samsung said it will recruit some 1,000 researchers for its South Korea-based AI research center going forward.

Samsung Electronics said it will invest aggressively in the fifth-generation network technology, which is anticipated to contribute to the growth of self-driving cars, Internet of Things solutions and robotics.

As for the bio business, Samsung claimed that it wishes to foster the segment to become another major pillar of its portfolio like semiconductors. Samsung Electronics Vice Chairman Lee Jae-yong has requested that the government ease regulations on the bio segment.

Samsung, which earlier acquired U.S. automotive electronics firm Harman International Industries Inc., has been making various progress in this field. The company's move came as the sector calls for top-notch chip and display technologies, in which Samsung enjoys an edge over rivals. 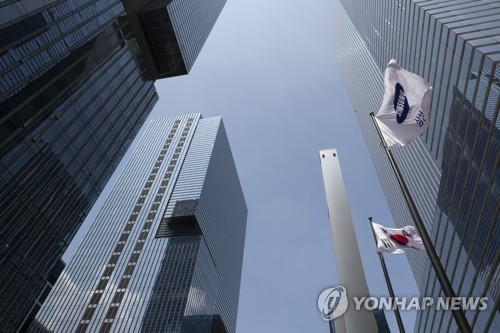 Samsung said it will also bolster its mainstay chip business, which is already the major source of profit for the company. The area accounted for 78.1 percent of the combined operating profit in the second quarter.

The company then said it plans to cope with the rising demand due to computers and smartphones, and will expand investment in the local production line as the need for chips will soar down the road as progress is made in AI, 5G, data centers and automotive technologies.

Industry watchers said the company's latest investment plan is set to focus on building Samsung's capabilities in the chip segment, as global rivals, especially those from China, have been trying to catch up.

"The latest investment reflects the company's belief that it may fall behind the competition if it takes its current position as a global leader for granted and is lax is making investments now," an official from Samsung said. "The plan came as a result of executives' discussions on the plan's sustainability, viability and appropriate amount since earlier this year."

For Samsung, the latest investment plan goes beyond fostering new growth engines and came to be seen as a concerted effort to move past its tainted reputation caused by Lee's connection to a political scandal that led to the impeachment of former President Park Geun-hye.

Lee was released from prison with a suspended sentence in February.

With his case to be reviewed by the Supreme Court, coupled with incumbent President Moon Jae-in's drive to impose tougher restrictions on family-controlled conglomerates, industry watchers said Lee sought to recover the group's public reputation and build a better relationship with the government through the investment.

Samsung said it plans to directly employ 40,000 employees over the next three years, hovering above the company's average employment of roughly 25,000 over the past three years.

With 130 trillion won of the combined 180 trillion won intended to be invested at home, Samsung said around 700,000 jobs will be created overall here following its move.

Samsung highlighted that the investment focuses on helping subcontractors and other smaller companies that actually hire the bulk of the country's workforce.

Calling this goal an "open innovation," the company said it will raise a 100-billion won fund to roll out various programs centering on expanding cooperation with professors and institutions.

In order to beef up the competitiveness of local small and medium-sized firms, Samsung said it will assist local firms with adopting smart factory production solutions under cooperation with the Ministry of SMEs and Startups. A total amount of 110 billion won will be raised for the program, with Samsung accounting for 60 billion won.

Samsung said it already helped 1,086 companies adopt smart factory solutions from 2015 through 2017, with the beneficiaries observing an average 5.5 percent increase in their sales.

The company said its programs to support subcontractors adds up to a whopping 4 trillion won.

Samsung also vowed to lend its support to fostering the country's software industry and providing education programs to 10,000 students over the next five years. The trainees will be able to share the company's vast technology know-how.

Talented students will receive opportunities to work at overseas research centers under cooperation with Samsung.