However, sparring, or "kyorugi" in Korean, is not the only way that the Korean-born martial art is contested. There's also poomsae, in which practitioners demonstrate the attacking or defense moves of taekwondo.

At the 2018 Asian Games, taekwondo poomsae will make its debut as a medal sport. Four gold medals are up for grabs, and South Koreans hope they can win all of them.

"I think we can win all four if our athletes avoid making mistakes," said Kwak Taek-yong, coach of the South Korean poomsae team. "This is a good opportunity for us to show the power of the sport's birthplace."

Kwak said the Asian Games are also an excellent stage to show the greatness of taekwondo poomsae when compared to karate kata.

"At the 2020 Tokyo Olympics, karate kata, which is like taekwondo poomsae, is contested as an official sport," he said. "People can check out taekwondo poomsae's style and characteristics through these Asian Games. They'll find it interesting."

For this year's Asian Games, athletes will have to perform three different styles of poomsae. While there are traditional and basic styles of recognized poomsae, people will pay more attention to "new poomsae," which involves higher-level techniques, and freestyle poomsae, in which practitioners perform with background music like in figure skating.

"The contestants will be judged by various criteria, but they'll first have to jump higher, execute moves cleanly and make a safe landing," Kwak said. "Our athletes are strong in any of the three poomsae styles, and they just have to perform like they did in the training."

"Compared to taekwondo sparring, I find myself calm and comfortable when I perform poomsae, and that's why I chose this discipline," said Kwak Yeo-won, who will compete in the women's poomsae team event with two others. "Some people said those who launched poomsae started the discipline because they were afraid of getting hit by opponents in sparring. That could be true, but poomsae gives a different type of excitement and feeling than that of sparring." 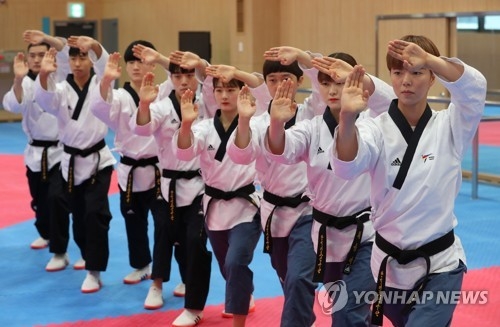