SEOUL, Aug. 8 (Yonhap) -- South Korea is moving to complete an investigation into the cause of fires in BMW vehicles within this year, while considering adopting punitive damages against carmakers that fail to meet safety requirements, the transport ministry said Wednesday.

During her visit to the state-run Korea Transportation Safety Authority (TS), Kim Hyun-mee, minister of land, infrastructure and transport, called on automotive engineers and experts to finish a probe into the cause of recent fires by December.

She also said the government is giving serious consideration to introducing the punitive, or exemplary, damages system, which it expects will keep automakers from delaying recalls to hide or scale down defects in their vehicles.

Punitive damages are imposed on a plaintiff in excess of actual compensatory damages in order to punish violators for a reckless or willful act. 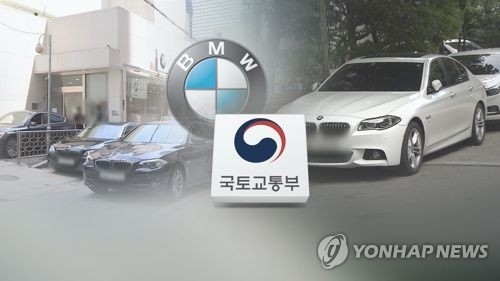 The minister's remarks come after BMW held an "urgent" press conference in Seoul on Monday to say the cause of fires in the engine rooms of its vehicles is "only a hardware issue and it has nothing to do with software."

Vice President Johann Ebenbichler in charge of quality at BMW Group cited the leakage of an exhaust gas recirculation (EGR) cooler as the main cause of the fire incidents that happened in BMW cars in Asia's fourth-biggest economy this year.

He stressed the German carmaker used the same software and hardware for its vehicles sold in Europe and Korea. But the executive didn't explain why EGR-related fires are concentrated in Korea this year.

On Wednesday, the minister asked BMW to come up with an answer to the question of why fires are happening so often in Korea.

There have been 34 cases of fires in the engine compartments of BMW vehicles, mainly the 520d sedan, coming into 2018. BMW said it will recall 106,317 vehicles to make an emergency check on the EGR component at its 61 after-sales service centers around the clock during a two-week period ending Aug. 14.

The transport ministry said 10 percent of BMW vehicles that underwent the emergency examination are at high risk of fire.

"In the government-led investigation, any additional faulty parts which may have caused fires in BMW cars could lead to a forced recall," Kim said.

It vowed to review existing laws and regulations involving the recall system to prevent carmakers from taking advantage of loopholes that could jeopardize public safety.

S. Korea aims to complete probe on cause of BMW fires this year

S. Korea aims to complete probe on cause of BMW fires this year