SEOUL, Aug. 9 (Yonhap) -- When he was ordered to pack up and leave a joint industrial complex in North Korea's border town of Kaesong in early 2016, Yoo Chang-keun didn't expect the shutdown to last this long. He believed that his IT services company would be back online again sooner rather than later.

He was thrilled when South and North Korea held talks earlier this year, which were followed by summits involving the two Koreas and the United States to discuss the North's nuclear issue, a major factor that led to the closure of the factory park.

"I thought it was a miracle given that there were exchanges of war threats between the North and the U.S. up until last year," he said. "The mood had changed in a dramatic way, and especially after the summit between North Korea and the U.S., we thought we could go into Kaesong soon."

His optimism, however, is now being chipped away and a sense of frustration is kicking in again as progress has been slow with regard to the reopening of the industrial park, apparently constrained by sanctions imposed on the North for its nuclear and missile provocations.

When it opened in 2004, the industrial park in Kaesong was hailed as a symbol of inter-Korean economic cooperation as it combined South Korean capital and technology with cheap labor from North Korea.

Yoo's firm was one of about 120 South Korean companies -- mostly textile, chemical and food manufacturers -- operating in Kaesong by employing more than 50,000 North Korean workers at their peak days. It was regarded as a successful business model.

Their operation came to a screeching halt when the Seoul government abruptly shut down the complex in February 2016 to punish the North for its nuclear and missile provocations. It marked the closure of what was left of major cross-border projects after a tour program to Mount Kumgang was suspended years earlier.

Recent warming inter-Korean ties have raised prospects for diverse inter-Korean economic cooperation, with many expecting that a resumption of the joint industrial complex in Kaesong might be among first such moves.

Things, however, have been slower than expected as sanctions remain a major stumbling block for resuming or expanding inter-Korean economic cooperation.

South Korea and the U.S. have been firm in their stance that sanctions relief will have to wait until the North completely gives up its nuclear weapons program, virtually blocking full-blown cross-border economic cooperation.

The problem is that the talks on denuclearization appear to be stalling since the landmark summit between North Korean leader Kim Jong-un and U.S. President Donald Trump in Singapore in June.

South Korea is apparently eager to push for more active economic engagement with North Korea but its efforts have been hamstrung by the global sanctions regime that it had spearheaded until last year.

"Sanctions have been designed more densely than we thought," a government official said on customary condition of anonymity. "It takes time even to know whether a project does not violate sanctions. It seems that the efforts to fill the so-called loopholes until last year are working now."

"It would be hard for us to roll back sanctions that we had spearheaded to build. What if the North resumes provocations? It would then become very hard to persuade other countries to join such a sanctions regime all over again," the official said.

The frustration might be detected in the Seoul government's recent move to call for sanctions to be waived on the implementation of agreements reached between the leaders of the Koreas in their summits.

Since the April summit, the two Koreas have held working-level discussions for cooperation in diverse areas including roads, railways and sports. They are also pushing to open a joint liaison office in Kaesong this month for which the Seoul government said that it is in consultation with the U.N. to get a sanctions waiver. 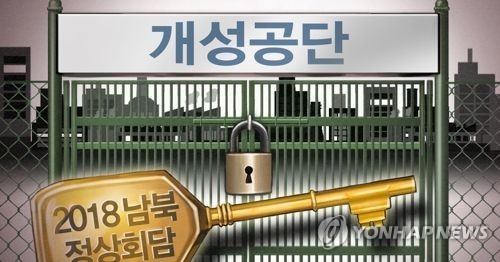 The North has voiced frustration with what it sees as meager progress in cooperation, calling on South Korea to take more substantive steps to follow through on their summit agreement and urging it not to use sanctions as a pretext for dragging its feet.

The North appears to be focusing on resumption of the suspended projects, including the Kaesong complex, which it apparently sees as a successful business model through which it could control its people's exposure to the outside and maximize its own economic interests.

In a memoir, Thae Yong-ho, a former deputy ambassador at the North's embassy in Britain who defected to the South in 2016, said that leader Kim Jong-un frequently praised the now-shuttered inter-Korean industrial complex in Kaesong as economically beneficial to the North.

He added that Kim ordered the construction of 14 more such industrial parks across the North.

Such full-blown economic engagement with the North might be a long way off. Experts still call on companies to get ready for business opportunities they could have when the North opens its door.

They said that once the North opens for business, it will be an uphill battle for South Korean companies, in that they would have to compete with other firms, such as those from China, that already have a firm footing in the North.

"If talks are under way to improve relations between the North and the U.S. and also between the North and Japan, our companies would face fierce competition from American and Japanese companies, as well as those from China," Lim Eul-chul, a professor at Kyungnam University's Far East Institute, said at a recent forum in Seoul.

"Investment in North Korea will come as an opportunity but also as a challenge for our companies." 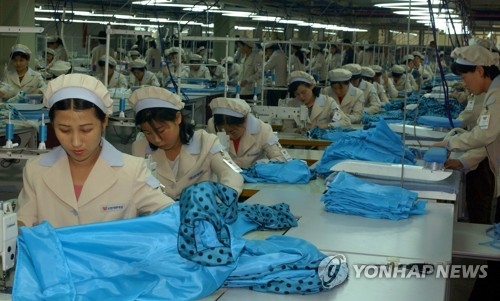 Companies, mostly smaller firms, seem ready to jump in for business opportunities in the North.

According to a survey conducted on 200 small and medium-sized enterprises in June, 49.5 percent expressed interest in joining inter-Korean economic projects, citing low labor costs and the convenience of a common language as advantages

What companies are asking for in doing business in the North, however, is security and predictability as evidenced by their experience of being forced to leave the Kaesong complex more than two years ago, causing them to incur losses.

Apparently reflecting such concerns, the Seoul government recently announced a plan to strengthen protection for companies doing business in the North.

Under the plan, the government will have to put any restrictions and bans on economic projects with North Korea to a Cabinet review and help normalize the operations of companies should they suffer losses caused by the suspension of inter-Korean commerce.

Yoo, who operated an IT service firm that employed about 400 North Korean workers and provided software and hardware installation and maintenance services in Kaesong until its closure, welcomed the decision.

"There should be measures that will enhance predictability in doing business in the North. Safeguards are necessary to shield companies from fallout from any political decisions," he said.

Yoo noted that no matter how unpredictable things in the North might be, he and many others are more than willing to enter the border town should it open again. He saw the Kaesong industrial park not just as a business opportunity but also as something that will be conducive to deepening inter-Korean relations.

"The Kaesong industrial park is a very important and valuable experience that helped us get over a division," he said. "It should be used as a development model for inter-Korean relations. We should not lose it just over nuclear issues."