Foreigners bought a net 140 billion won worth of shares on the main exchange, while individual and institutional investors offloaded a net 13 billion won and 183.9 billion won, respectively.

"The U.S. and Chinese stocks both gained ground amid hopes of eased tensions over trade friction, and this has positively affected the local bourse," said Seo Sang-young, a researcher at Kiwoom Securities Co.

Most large-cap stocks had a mixed day of trading, with banking and bio shares leading the gains.

Top cap Samsung Electronics ended at 46,800 won, up 0.23 percent from the previous session's close, to continue a four-day winning streak. Earlier in the day, the tech giant announced that it plans to invest 180 trillion won over the next three years, apparently in response to the South Korean government's request to expand investment and employment.

Shares of biopharmaceutical companies gained ground, with Samsung BioLogics, a biopharmaceutical affiliate of Samsung Group, jumping 7.08 percent to end at 454,000 won, and Celltrion was up 0.55 percent at 276,000 won. 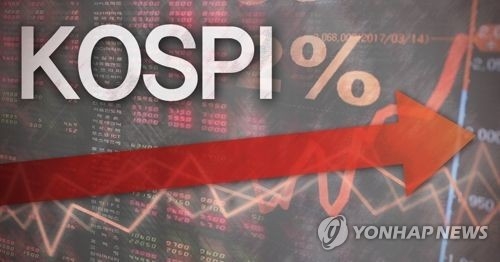