SEOUL, Aug. 8 (Yonhap) -- An inter-Korean workers' football match will kick off at Seoul's Sangam World Cup Stadium on Saturday, with about 30,000 citizens and laborers from both South and North Korea in attendance, organizers said Wednesday.

The rare football match between workers from the two Koreas, the first inter-Korean civilian exchange event since President Moon Jae-in held his first summit with North Korean leader Kim Jong-un on April 24 at Panmunjon, is scheduled to start at 4 p.m. at the football stadium in western Seoul, they said. 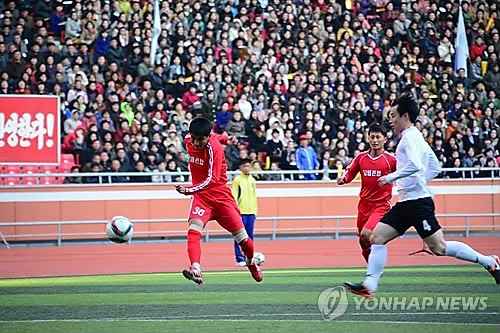 For the event, a 64-member North Korean delegation, led by Ju Yong-gil, head of the General Federation of Trade Unions of Korea, will arrive in South Korea via the western land border on Friday, they added.

In the opening ceremony that will precede the football match, Seoul Mayor Park Won-soon, Ju and leaders of South Korea's two labor umbrella groups -- the Korean Confederation of Trade Unions and the Federation of Korean Trade Unions -- will deliver congratulatory speeches.

Apart from the sporting event, the North Korean delegates will hold talks with their South Korean counterparts and visit the tomb of Jeon Tae-il, a South Korean garment worker who burned himself to death in protest for better pay and working conditions in 1970, in Maseok, Gyeonggi Province.