(ATTN: CHANGES police station where the complaint will be filed in para 2; ADDS info in paras 5-7)

Barun Law LLC said it plans to lodge a complaint on behalf of 20 BMW owners and one victim of a BMW vehicle-related fire with Seoul Namdaemun Police Station at 11 a.m. on Thursday.

The plaintiffs claim that it doesn't make sense that the carmaker became aware of the problem as of 2016 but failed to determine the exact cause until recently.

Last Friday, the company reported to the transport ministry that it had been collecting information on similar fire cases in Europe since 2016 and only recently found out that the exhaust gas recirculation module was defective.

The plaintiffs are calling for an urgent criminal investigation into the carmaker to secure evidence, such as correspondence between its Korean unit and the headquarters, to see if there were any attempts to cover up the defects.

On Tuesday, BMW Korea apologized for the defects and for causing public concern in a press conference and pledged to recall 106,000 diesel vehicles, including the highest-selling model here, the 520d, starting later this month. It also vowed to cooperate with the forthcoming probe by the ministry.

Meanwhile, the transport ministry looking into the case said it will consider sending a team of experts to the BMW headquarters and its assembly plant if that is deemed necessary to determine the cause of the fires, according to Rep. Hong Chul-ho of the main opposition Liberty Korea Party.

Hong said the ministry made the remark in response to a query from him. 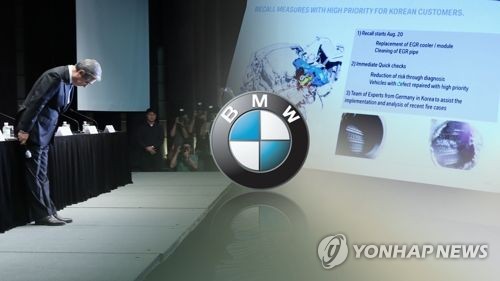