POHANG, South Korea, Aug. 8 (Yonhap) -- A man has turned himself in at a police station in the southeastern city of Pohang following his 4.56 million won (US$4,049) heist at a bank outlet, police said Wednesday.

The 37-year-old man surrendered to police at around 10:50 p.m. Tuesday, about 11 hours after he stormed into an outlet of the Korean Federation of Community Credit brandishing a knife then drove away with the money.

The outlet's staff were ordered to put the cash, including 90 50,000-won bills, into his bag, and the robber made off in a white passenger car that he had parked outside of the bank. The heist took only two to three minutes.

After the robbery, his family managed to talk him into giving himself up, compelling him to appear at the Pohang Northern Police Station.

During interrogation, he was quoted as saying that he robbed the bank due to financial distress and used the money to repay his debts.

Police believe he had no accomplices and plan to seek a warrant for his arrest after further looking into the suspect's motive. 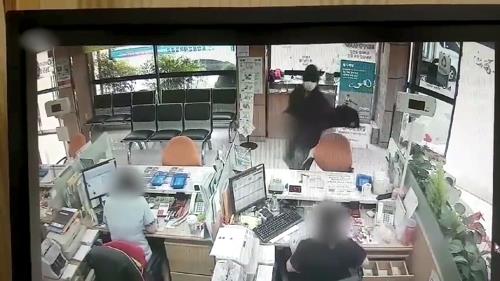 Bank robber turns himself in after 4.5 mln-won heist in Pohang

Bank robber turns himself in after 4.5 mln-won heist in Pohang