Lee welcomed Harris taking over as the American envoy in Seoul, saying the former Pacific commander is knowledgeable about South Korea, and expressing hope that relations between the two countries will further strengthen, the office said.

Lee also stressed the importance of the Korea-U.S. alliance, noting that the U.S. fought alongside the South during the Korean War and the ally also provided a great deal of support in the course of South Korea's economic rise from the war's aftermath.

Lee said he hopes the two countries will work closely together to resolve the North Korean nuclear issue, and asked the new envoy to play active roles in the process.

Recalling that his father fought in the Korean War, Harris said he's grateful for the warm welcome that South Koreans have provided him since his arrival as ambassador and that he will work hard to strengthen the alliance while communicating closely with the South.

Harris also said he will work to resolve not only the North Korean nuclear issue, but also other pending issues between the two countries, such as amending the bilateral free trade agreement and defense cost-sharing negotiations.

The envoy also said he hopes to see the two countries expand cooperation in such new areas as energy, cyber security, public health and women's empowerment, according to the office. 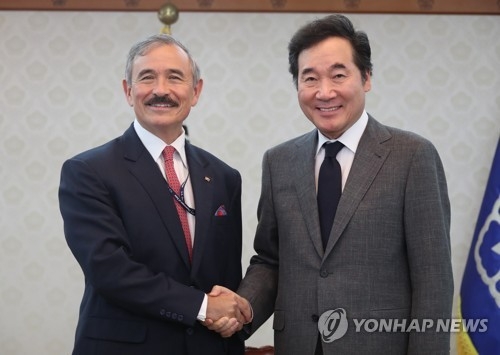