Hwang Hee-chan and Lee Seung-woo started training with South Korea's under-23 national football team for the Jakarta-Palembang Asian Games at Paju Stadium in Paju, north of Seoul, on Wednesday, following their pre-season schedule with their European clubs.

Hwang, 22, is with Austrian outfit Red Bull Salzburg, while Lee, 20, plays for Italian side Hellas Verona.

"I've been trying to stay fit for the Asian Games," Hwang said to reporters at Paju Stadium. "I want to be a forward who can help this team a lot."

Hwang, who has two goals in 16 matches for the U-23 side, was originally supposed to join the national team on Friday, but he made a strong request to Salzburg to release him early for the international duty. 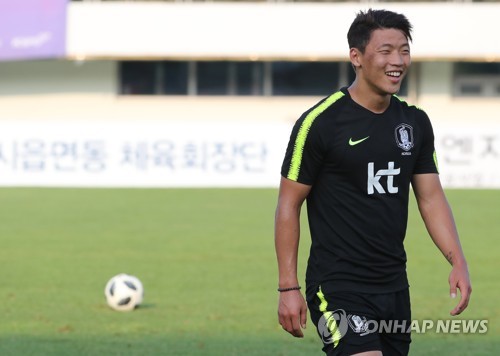 "I'm very happy that I can play with my old friends and other players after a long time away," he said. "There's pressure to win the gold medal, but we'll overcome that and will win the tournament."

Hwang and Lee both played at the World Cup in Russia, where South Korea suffered a group stage exit with one win and two losses. Tottenham Hotspur star Son Heung-min and Daegu FC goalkeeper Jo Hyeon-woo are the two others on the Asiad team who also competed at the World Cup.

Hwang said he matured through the World Cup. He played in all three matches, but failed to get his name on the scoring sheet.

"I put my regrets from the World Cup behind me during my vacation," he said. "A striker speaks with his goals. I'm ready to play a good tournament."

South Korea are the defending Asian Games champions and are considered favorites to win the men's football title again.

But Lee said South Korea should not let their guards down. The young Taeguk Warriors are matched up against Kyrgyzstan, Malaysia and Bahrain in Group E at the Asian Games.

"We should not stay loose just because we have a star-studded squad," he said. "People say we have magnificent forwards, but after all, you have to perform well."

Lee said he is not 100 percent fit but added that his form will improve in time. The former FC Barcelona youth player said he is only focusing on winning a gold medal.

"I don't want to make any excuses about pitch conditions or other factors," he said. "Although I joined the team late, what's important is the future. I'll work hard, so that we can play better as a team." 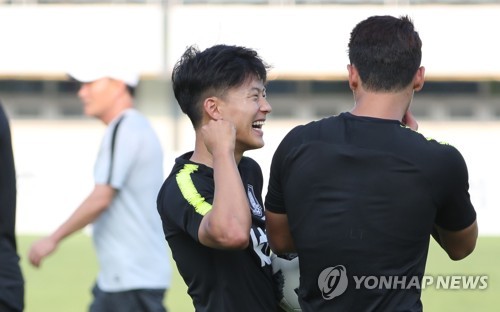